Why We Scare Straight Men


WHY WE SCARE STRAIGHT MEN
.
APRIL 29, 2015 IN PSYCHE
.
originally published in Nightcharm, 2001
.
BY GUY KETTELHACK
.
I’m not happy ’til I’ve found the quiver in a man. The hidden part that trembles. I don’t think I’m anywhere near home base with a sex partner if I haven’t beckoned to and found the involuntary part of him that shudders and opens and spills out what’s in it. 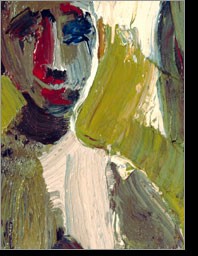 The dilemma of being a sexual “masculine” man surely lies somewhere in this paradox. On the surface of it, the “quiver” I talk about seeking in a man doesn’t square with — well, the square shoulders and armored muscularity of the male image many men want to convey — that many of us are turned on by. Although the howl of a man coming to orgasm is as much the howl of an infant as of a baying wolf, it’s the wolf most of us are willing to acknowledge, not the infant.
.
Maybe this seems like obvious stuff. Maybe — if you’re a gay man — it even seems wrongheaded, the lengths to which I suggest we’ll go to hide our vulnerability. In fact, to many gay men, the orgasm’s secret thrilling closeness to self-annihilation is no secret at all. Many of us are not only conscious of this volatile mix of terror and desire — we’ve often found ways to heighten it to an exquisite pitch.
.
We fuck the mind, sometimes, as expertly as we may fuck the butt or face — we know that sex is in the head. Some of us, in various ingenious forms of sadomasochistic edgeplay, have turned Sex’s defining threat of annihilation into wildly imaginative, unnerving but often profoundly satisfying erotic “theater.” Ambivalence, sexual ambiguity ain’t news to most of us. We play with it every day.
But it is news to most of the rest of the men on the planet. We know something as gay men that few heterosexual men know as well — or at all. We know what it is to fuck and get fucked.
This is why we scare the hell out of straight men. 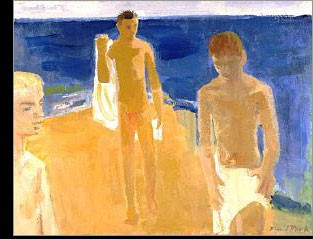 What I think of as “the gender track” is laid down very, very soon in each of us. In fact, it constitutes just about the earliest indoctrination any human being in Western society undergoes: it starts at the moment the newborn little blob of protoplasm we all once were gets dressed in pink or blue.
By the time, say, a little boy is three and, say, is leafing through a Christmas catalogue tearing out pages of Barbie doll ads and, say, his father walks through the living room and catches him — well, however “progressive” or “liberal” that heterosexual father may be, his reaction to his son cooing over Barbie is virtually guaranteed to be lethal. The child can register from his father a rejection so profound — even if it lasts only for another of those nanoseconds — that it lodges within him for a lifetime.
.
“There are some things,” the kid learns, “daddy must never know about.” Unfortunately, those “things” amount to some of the most central aspects of who we are. Most gay boys growing into gay men thus learn very early on what it means to be duplicitous: have an inside self, and an outside self. Far from pathology, to me this signals an amazing psychic ingenuity: we learn to hold on to what we love most, protect it — and figure out a way to navigate the rest of what we continue to discover (at least as regards our sexuality) is a very disapproving world.
.
Straight boys don’t have it much easier, but the challenges they face are fundamentally different. The persistence of homophobia is a fascinating marker of their particular grapple with growing up het. Whatever you may otherwise think of Freud, his depiction of the Oedipal “moment” in any child’s life, but particularly a het boy’s life, is pretty compelling — if only as a symbol.
.
Don’t freak at the jargon. As Joseph Campbell succinctly put it, it’s the moment when a boy becomes his father’s child instead of his mother’s child. It’s the moment when he accepts himself as different from mommy, and — through a series of wary standoffs ending up in an initially uneasy but ultimately very powerful (indeed self-defining) “tribal” bonding with his dad — finally defines himself as a Man. 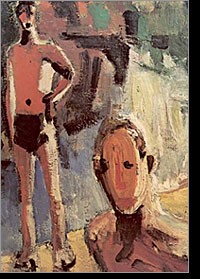 But there’s a problem. To reach this self-definition, he has to quash any vestige or feeling of identification with the female. He has to renounce any connection with his own vulnerability. This isn’t just an abstract problem. It’s what allows a straight man to get a hardon: convincing himself, “I’m a wolf, not a friggin’ baby!” (Talk to any het woman about fragile male egos and expect to hear — long into the night — endless evidence of how delicate a balance this macho bravado really is.)
So what happens? These fukkin faggots start flaunting their stuff! Hardest to swallow (so to speak) is: a lot of faggots are fukkin MORE “masculine”-appearing — better looking, tougher, more muscular, etc. etc. — than THEY (het men) are! This becomes very nearly intolerable: that a creature like you or me could play “Man” (sometimes) better than “the real thing.”
.
Is it any wonder that the worst epithet a nine-year-old boy on the playground could hurl at another nine-year-old boy (no less in 2001 than in 1951) is: cocksucker or faggot? The idea of a male permitting himself to “fuck and get fucked” — or, more to the point, the notion of one man fucking another man — is one of the most terrifying prospects a “het” male can conceive because it so violently counters his deepest Oedipal lessons — lessons which after all have given him his identity.
On some unconscious level, the idea of one man’s dick up another man’s butt inevitably makes him think: “Daddy would kill me if I did that” (or worse, “did that” with Daddy. This is why the incest taboo is so powerful between father and son.)
.
But of course, there’s another reason it’s terrifying. Because — given the latitude of the sexual continuum in which we all (pre-gender indoctrination) participate — none of us is entirely free of the desire to “fuck and get fucked.” The felicitously surnamed Brian Pronger (in his book The Arena of Masculinity) gives us a stunning insight into the lure and taboo of two men fucking in his description of the jockstrap as an eroticsymbol of both phallic power and anal receptivity — which suggests why the paradigm of two-men-fucking is so unnerving to straight men:
.
The jockstrap is perhaps the quintessential homoerotic ritual robe because, just as it enshrines the symbol of the myth of masculinity, so too the straps that originate in the top elastic circumscribe the buttocks and disappear at the anus, bringing us to that place where masculinity meets its mythic undoing.
.
In adopting the jockstrap as an erotic fetish, gay men have once again raided the sanctuary of the “butch” straight male locker room — and revealed its central symbolic raiment for the erotic dick-crotch-and-butt-framing device it inescapably is. Once again, gay men are shoving stuff into straight men’s faces that straight men have a powerful investment in not knowing — blasting through heterosexual males’ entrenched defenses against their own homosexual curiosity (and, God help them, desire). No wonder they want to kick faggot butt.
.
But what about us? “Ambivalence, sexual ambiguity,” I suggested before, “ain’t news to most of us. We play with it every day.” Well, many of us do. But not without cost.
.
To me, the problem gay men face isn’t so much “internalized homophobia” as it is an internalized fascistic (dogmatic) notion of masculinity.
.
Homophobia is a reaction to fearful tenets about gender that precede it — lessons of gender laid down so early that, unconsciously, they seem incontrovertible. The bad news is, we can’t eradicate these lessons — in some ways, we depend on them for our own self-definition (if sometimes more in defiance than adherence) as vitally as our straight confreres do for theirs.
.
The good news is, we can become more conscious of these allegorical warriors in the pit of us — these guardians and seductresses that both bar the way to the “aliveness” of an orgasm and beckon us into it. We can, in other words, learn we can tolerate the inevitable conflict these wolves and infants create for us — be enriched by it — allow it to show us new ways to “play.” The more important question this will help us to answer is not so much “why we scare straight men,” but why we scare ourselves.
.
We’ll discover that we each have our own very particular answers to that question — answers peculiar to our own idiosyncratic selves and souls.
But boy it can be fun figuring them out.

All of the paintings featured here are by California artist David Park. Park is responsible for helping to develop one of the most vital and inventive shifts in American postwar art. His reassertion, in the 1950s, of the primacy of the figure within abstraction initiated a return to figuration that continues to impact American painting today. Park’s palette, derived from French impressionism and Fauvism, was keyed up to render the legendary light of California. He died of cancer in 1960, at the age of forty-nine, while at the height of his powers.
.
The opening painting Four Men (oil on canvas, 1958) is from the highly recommended book Male Desire: The Homoerotic in American Art by Jonathan Weinberg.

Posted by Guy Kettelhack at 6:15 PM