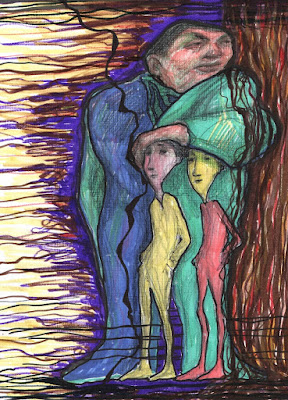 http://www.youtube.com/watch?v=shYu9aWNe-8
.
I’ll never have a son or daughter.
I slaughtered any likelihood of that.
It’s not just that I’m gay. There are other
ways to foster progeny than through
.
the customary man and woman family plan.
But I’m content to be the witting beneficiary
of unwitting chance: the coupling of a father
and a mother in the sanctioned pleasures
.
of the ancient dance, which however by some
measures failed by not producing others through
new fathers and new mothers to the line.
My brother’s sexual proclivities reflected mine.
.
Venus never met our penises: Mars perhaps
too often has. And yet I’ve known a kind of jazz
epiphany through procreative sexual abandon:
libidinizing life – as if that were the apparatus
.
of a wife with whom I’ve peopled my New York.
(Blake sat naked in his London garden, singing
to his progeny of poesy, heralded by angels
in his trees.) I am among this city’s legacies.
.
New York is my spouse and child; I am its.
If I have a generative purpose, here it sits.
But am I only apparatus? Do I have blood?
I dream I’m standing with my father and my
.
brother in a downpour of precipitating mud.
Solipsism drops in dollops of itself, discarded like
denatured coffee grounds, forgotten by the pot.
My epitaph’s a rueful laugh: “I’m all I’ve got.”
.
.


Posted by Guy Kettelhack at 11:05 AM No comments:

He Even Gave Me the Rock 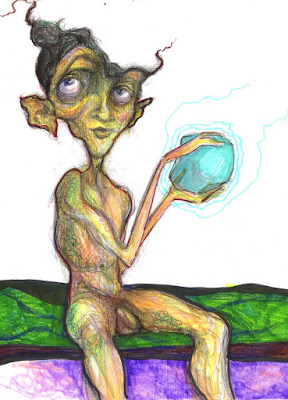 https://www.youtube.com/watch?v=Mw8dT3WETbU
.
We wonder as we try to oversee
the vast horrific traffic jam that we
have generally made of what we’ve done,
how much was duty, how much was fun?
.
Could duty and fun be the same?
Perhaps that’s the clue to the game.
It isn’t exactly that everything’s One.
Everything’s everything: duty and fun,
.
and as variously and confusingly bundled
as let’s-call-It-God is each time It has trundled
Its Godself into yet a newly inscrutable Universe,
wondering: meaningless joke, or luminous curse?
.
Should the moon be averse to the Earth?
Should dying be bundled with birth?
Look at this crystalline rock sparking lights
indiscriminately through the days and the nights
.
like the flights of the limbs of a dancer.
I found a fellow who says that’s the answer.
He even gave me the rock.
I’ve not got over the shock.
.
.

Posted by Guy Kettelhack at 5:51 PM No comments: 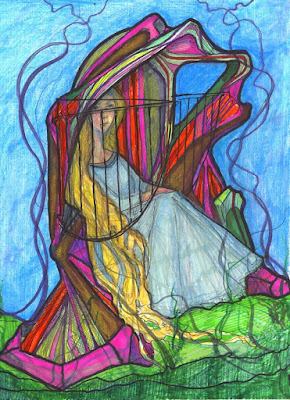 https://www.youtube.com/watch?v=LjAAuXxb43c
.
When Rapunzel was remanded for those many weeks
and months and years to live up in the highest reaches
of that tower, what mattered wasn’t that the prince learned
.
how to climb her hair up to her head as if it were a ladder –
no, her grievances about this cruelty were screamed out
very loud across the Alps; documented evidence concurs
.
it shattered eardrums. She’d shed no tears from altitude,
had no fear of heights. Neither had she much desire to reside
below. What interested Rapunzel was enclosure. Her much
.
renowned composure she accounted for by one delight
to which indentured life exposed her that she never knew
was possible until she lived those lovely solo hours in
.
a tower, with nobody to glower at her or to glower at.
She didn’t even miss her cat. What she learned was how
she could engender grace in semi-open chambers that
.
existed solely to provide a single seat. With increasing art
and frequency, she learned to make a place for secrecy.
Her neat designs for comfortable fancy huts that shut away
.
while showcasing her exultation of the Ideal Chair are very
rare, and coveted world-wide. Mostly she’d be glad that
we’ll forget her doltish husband, but will recollect the bride.
.
.

All We Know of Kay 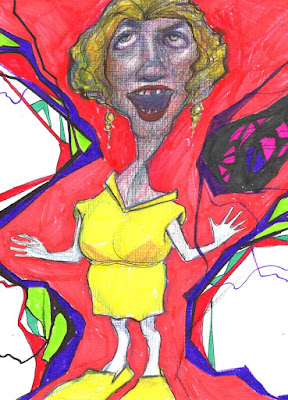 .
https://www.youtube.com/watch?v=6CZS0vOAbLQ
.
While she wasn’t very pretty,
by the standards of the day,
she supposedly was witty,
though we don’t know in what way.
She went to art school in the city.
She majored in display.

Posted by Guy Kettelhack at 9:52 PM No comments:

The Purposes of Color 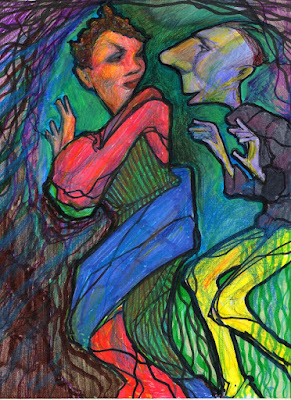 .
https://www.youtube.com/watch?v=Pqcl7DPJKHU
.
Today when drawing made me add and mix and cultivate
and infiltrate and undermine and unrepentingly remand
to thirsty textured stiff white paper – where I hunkered
down (just right behind the firing line) for hours today –
.
my whole armée of colored markers, pencils and the single
square-edged stick of azure chalk I’ve got to keep things
sometimes hazily and sometimes brazenly in situ – from
and into which they, on their oceanic own, fight messy wars
.
with one another to eke out a unity, a singularity, a whomp –
at last I recognized the not-for-profit complicated business
I’m now in. I sort out on surfaces a grand arena in which
colors can assert their purposes. Takes an angry mob of them
.
to do this job. Is this a narrative that wants to tell itself I’m
letting tell itself? Not intended. Although by all means, if you
see one, have your way with it: lick it, kiss it, kick it, bend it.
While I am not too swift on human beings’ leanings, I guess
.
these colors could suggest the possibility of something we
might just as well (hell, given who is wielding them) call
“human meanings.” Whatever they may be. “Play with me!”
they cry. “Okay,” I’ve made it now my business to reply.
.
.
.

Posted by Guy Kettelhack at 6:02 PM No comments:

Pangaean Diaspora: On the Strange Business of Change


Posted by Guy Kettelhack at 9:46 PM No comments: 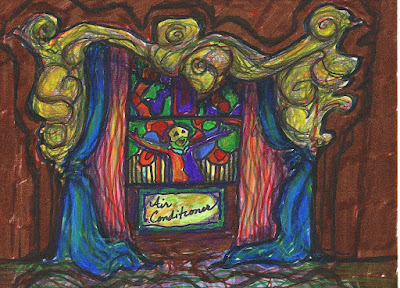 Posted by Guy Kettelhack at 2:31 PM No comments:

When Someone Tells Me No 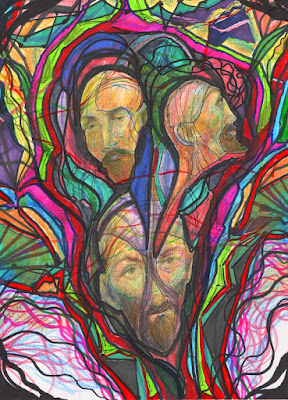 I love to go too far when
someone tells me no.
I plot nefarious heists.
.
I mutate less like Darwin
than like czarist overthrow
or gregarious poltergeists.
.
.
.
. 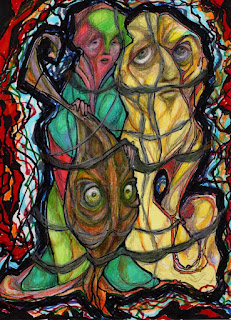 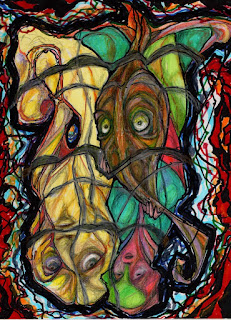 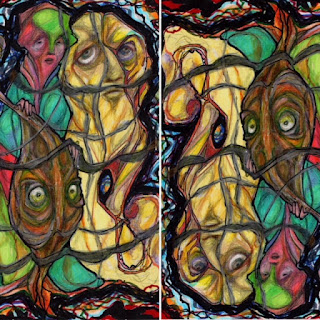 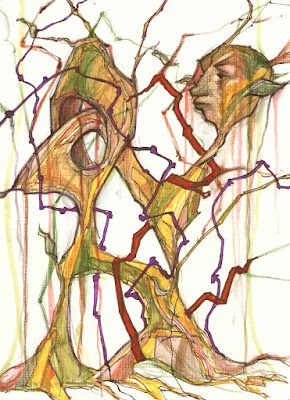 https://www.youtube.com/watch?v=PTTpWpWva-U
.
The body’s adaptation to abrupt
enlightenment can look bizarre
to the untutored eye.
.
Burt got re-begat by his epiphany
into a random branchiness.
Nobody knows why.
.
Truth is beauty, Keats declaims
from his poetic pulpit. Burt says
bullshit. “Ruth’s a beauty,
.
maybe” (Ruth’s his erstwhile girl
who will not love him as a tree),
“but Truth screwed me.”
.
.

Posted by Guy Kettelhack at 11:30 PM No comments: 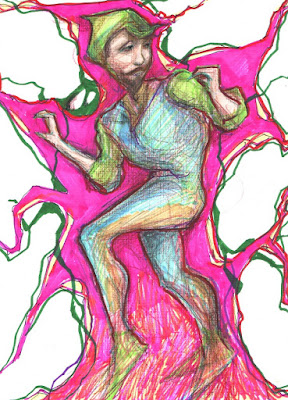 beyond the propagation of a species –
do we think we have to buy? On what
result of it can we rely? Is it fun?
.
A spastic act? A fact or a phantasm?
Is it the alternating current of a body with
a body feeling powerful or overcome or
both that keeps us craving it until we die?
.
Haven’t said a damned thing yet
about why I can’t wait to get into a bed
with you that isn’t facile rhyme. I’m writing
poems when I ought to be igniting me
.
and you into a brazen blaze of hot blue
flesh and reckless tenderness –
a dangerous unfettered mess of trying
to make sex be more than sex. I’ll come,
.
my instigating bum-be-dum,
oh yes, I’ll come, I’ll come,
don’t worry, soon I’ll come, yes:
coming is what I’ll do next.
.

Posted by Guy Kettelhack at 11:29 PM No comments: