Emily Dickinson, Alan Watts: Be Wary What the Artist Spots 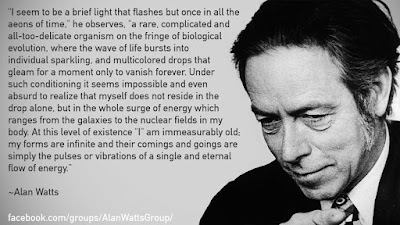 I love this Watts quote and utterly align with it. But I did wonder, didn't I, what Emily might have thought. I wondered, first, if she too might align with it - so elusive and encompassing is her own "I." But then I thought - well, what comes out in the following two-stanza quatrains which, with reprehensible presumption, I've just now written  as prologue to what might have been her response to him: "What Mystery Pervades a Well!"

Emily Dickinson breathed upon
this cosmic edge as well,
though one is never sure if she
saw heaven there, or hell.

She wrote, howe'er unwittingly,
this verse for Alan Watts
to caution him not to be sure
he sees all that he spots.

What mystery pervades a well!
That water lives so far –
A neighbor from another world
Residing in a jar

Whose limit none has ever seen,
But just his lid of glass –
Like looking every time you please
In an abyss's face!

The grass does not appear afraid,
I often wonder he
Can stand so close and look so bold
At what is awe to me.

Related somehow they may be,
The sedge stands near the sea –
Where he is floorless
And does no timidity betray

But nature is a stranger yet:
The ones that cite her most
Have never passed her haunted house,
Nor simplified her ghost.

To pity those that know her not
Is helped by the regret
That those who know her, know her less
The nearer her they get.

Hi i have read your post and i think it's useful. Thanks for the sharing this website. it is very useful professional knowledge.