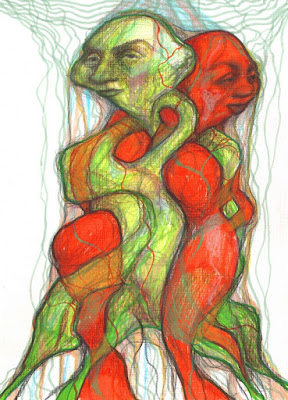 Like stations of the cross, some intimate relations
can remand their partners to accomplish solemn
duties: readily enough, at first, ostensibly proceeding
ritually, as they seem to be, to heeding sources of such
beauties as account for why one or the other finds
a knee or elbow, curve of ass or heft of lurid
apprehensions in the shadowy morass of each’s secretive
.
intentions so robust. Gentility must bow to lust; lust
must bow to every alien reaction it will find as it pervades,
invades and otherwise attempts to get its business “laid”
in all the tempting centers of intensities it’s sensed
are beckoning to it to have its way – but now turn out
to be less invitation than defense: a stay against
the terrible predation that awaits if they’re so much
.
as breathed upon: much less assessed as lewd. Brewed
from the equivalent of acidosis of a fear of loneliness
and loss so great that it becomes a love of both, the only
troth that lust can pledge is to itself, which leads it to
encroach upon the nucleus of intimacy to induce
immediate production of a psychic mucous whose thick
slippery assault on every surface of the mind and heart
.
and skin begets a quite remarkably immediate resistance,
out and in, to any notion of embracing, tasting, kissing,
smelling, or in any way adjacently abiding flesh. Sex
attains the poverty of death. Lust begets disgust begets
entanglement too meshed to do a thing with but despair of.
What, now, will you take care of? Surely not this strange
newfangled disingenuous shenanigan called love.
.
Ha! Did I make you quake a tiny touch, my turtle dove?
April fools! If two months late. (Let’s not be hampered
by a date.) We don’t mean a word of this. Love is always
bliss and kisses. Love is always lovely butter cream,
waiting to be spread upon a cake, lavished like
a dream upon your body, heart and soul. Come here!
Let’s make some now. You get to lick the bowl.
.
.
Posted by Guy Kettelhack at 6:51 PM