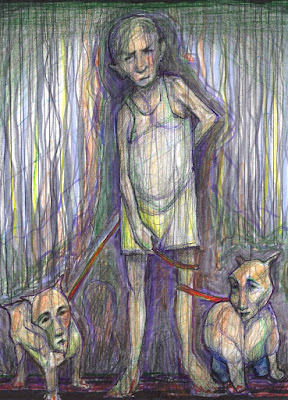 https://www.youtube.com/watch?v=R8tQJY9bDEg
.
First thought when he wakes in his bed.
He recalls his whole family is dead.
He rummages ‘round in his head to think
what he might think up instead to give
.
some kind of mass to the zero that dead is.
What is the aim of the scheme?
Here’s what the dream is he wakes from.
It’s eternally raining in August. He thinks
.
it is morning but grayness could be
any of time of the day not yet night.
He walks his two canine but human-faced
pets who entangle themselves in his limbs
.
every time they go out and get wet:
he never wears more than his underwear.
He can feel his face scowl but he can’t
feel what it might be scowling about.
.
This isn’t what life is like, of course. This is
what life really is. He eschews metaphor
but enjoys using simile: likes “neat as a pin”
most of all. He savors its subversiveness:
.
that such a small sleek straight sharp point
should be able so neatly to puncture the flesh,
spill the blood, even kill – more deadly than
such a small thing ought to be – and that
.
this should wrest out the essence of “neat” –
surely no other words bore such replete
simulacra of actual thing. “Neat as a pin”
was as close as four words could become,
.
even bring you, to what to believe. Yet
like the words death, father, son, mum
and brother, at last they deceive and they
numb. Mum’s the word. Every word’s mum.
.

Posted by Guy Kettelhack at 2:41 PM