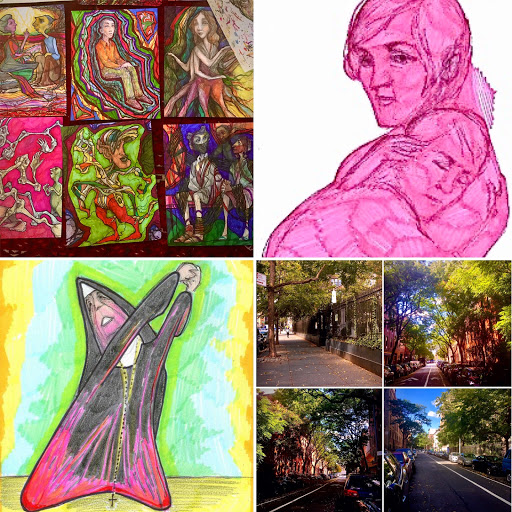 Has anything caused you to consciously reinvent yourself in a way you never could have imagined?  (question on Quora)

Now there’s a question you can take to bed with you - really only to subject it to every measure of sensual persuasion you’ve got to see how long it will take to succeed, and to what degree you and it will convince each other you have succeeded, in prodding, seducing or cajoling each other’s substancelessness - yours & the question’s - into one of only two possible manufactured ‘emotional’ outcomes: feeling excruciatingly exposed or hopelessly beyond any chance of ever being understood. There’s a kind of aching ecstasy to be had here for a very short while.

The most obstinate kicker of a single word in the question arrives in the form of its lethal adverb ‘consciously’.

Consciousness of oneself is an entire impossibility, at least if the condition sought is framed for you as some version of ‘objective’. The great lie we cannot help sustaining about ourselves is to believe (pathetically in the effort to keep sane) that we can in any way - say through the agency of the great fabrication so many of us ferociously refuse to refuse - the substanceless abstraction ‘Soul’ - manage to separate from our thoughts and physical sensations in order thereby to ‘see’ what manner of thing they (and we by the illusion of contrast to ‘them’) may really be. The circumlocutionary syntactical maneuvers we attempt in the cause of finding and inhabiting a ‘stance’ of clarity of perception which can permit this impossibility are heartbreakingly vacant of power. They are little whiffles of swish in an imaginary wind which of themselves harbor no wish to help or hinder, heal or infect, add to or subtract from any of the arbitrary forms or imagined principles governing the ‘substance’ we are convinced are what gives us shape and shadow. Language inevitably breaks down in the face of any mission foisted upon it to describe a single ‘thing’ definitively. We are and we exist entirely as Unknowing. We are remarkable for our persistence in face of this Unknowing. All there is, is Unknowing. That’s it. There’s nothing to make of anything else. If you don’t end with your mental exertions dissembling in and into a blithering heap - well, there’s no other way out but that. The heap will deconstruct into a blither and be what it only ever was or could be: Unknowing.

I wrote a poem ten years ago, September 30 2010, which I dare to suggest may offer a little peace in these troubling matters: it entertains a notion I still am unable to clasp completely to my soul and heart but which tenaciously retains a sort of hold on me. I can’t banish it to oblivion. It traffics in the sentimental notion of faith. I abide with its possibility.

Being blankets and suffuses, underlies and overlays; nothing

doesn’t have a cover from which nothing isn’t made: everything

is anything you like: constellated atoms spike and swoop

and promulgate their warp and woof to keep you fizzing

in a grand and infinitely busy camaraderie. Biology is physics:

sentiment is quarks. Everything’s a spinning whiz: whirling like

families of probabilities and permutations of exacting essences

of star. We like to think we’re taken care of. Perhaps we are.

Posted by Guy Kettelhack at 9:27 AM