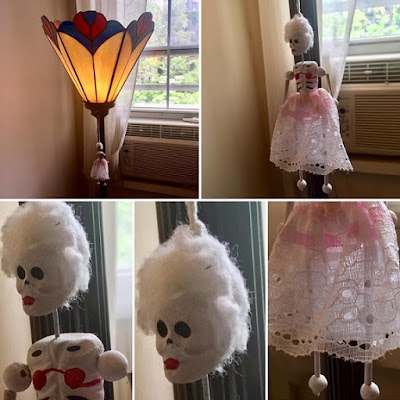 https://youtu.be/za44zAS41-o
.
As the 1st of June awakens him, he chances to espy,
suspended slyly from a stained glass Tulip lamp,
a white-haired lady hanging what for her was high.
He thought he ought to pay her heed, revamp
.
her tale to fill its vacancy. He got her in Tulum,
a secret amatory trip a year before to Mexico
(which had a lotta vava and a fair amount of voom).
She was in a tourist shop’s small room: a hex - a show,
.
an oddly lewd and unapologetic silent Yo! mutely braying
she was dead: Hey you (it seemed to him) said she,
give up your silly pleading and your pious praying:
before long you’ll be just as dead as me.
.
Poor sorry thing, abandoned in the giant hive
that misbegotten millions wrongly call ‘their’ city
(wasn’t theirs). She wasn’t dead, she’d never been alive —
remanded to a man telling lies, stranded in his pity.
.
Posted by Guy Kettelhack at 11:26 AM