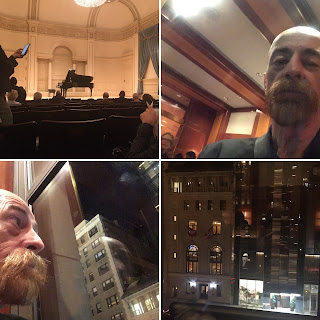 My entire life has been charmed but I didn’t begin to realize how charmed until I moved to New York in 1975. I got the full gust of it then in the ways it engulfs a hungry horny sensitive 24 year old: it is of course equal to any energy level you bring to it.
.
‘Charmed’ isn’t what you’ll always assess later as ‘good’ although I hold the strength of its hold on me as ultimately life-giving and therefore life-saving. But you can be charmed into a kind of insanity - indeed if you’re here for 44 years (the very fact of which proclaims you wanted to be) I can’t see how you can avoid stretches, some short, some much longer, of whatever particular insanity you can’t get to any self-realization without having dived into head-first. These are private insanities and can kill and derange you but, survived, they can be the making of you, and they are nobody else’s business.
.
But when you’re 68, forty-four years after having gotten here at 24, and in a sweet state of warm shock register that someone (after all these years) still wants you to play hard stuff from the first chair of the first violins in a pretty great community symphony orchestra (as I have the honor of doing in Broadway Bach Ensemble’s next concert) and someone else entrusts you with the invitation to write reviews for an arts journal about any number of disparate plays and pieces of performed theater and music (as I have been invited to do for artspress) you awaken yet more widely and deeply to the effects of having been subjected to this city’s relentless exertions of charming you into its center - which happens, as it turns out, exactly to be YOUR center, gratifying the most private glories specific to you imaginable.
.
Hence my having just now been in Carnegie Hall’s adjacent ‘organ’ Weill Hall, on whose stage I once sat nervously to turn pages for Diana Fanning playing a recital with cellist Dieuwke Davidoff - oh, Diana, what year was it, 1982? - and where I’ve just been now to listen to the formidable playing of pianist James Dick in order to write a review of it.
.
There is nothing wrong with this ‘picture’ - this sprawl of my New York life. Nothing at all!
Posted by Guy Kettelhack at 7:41 PM