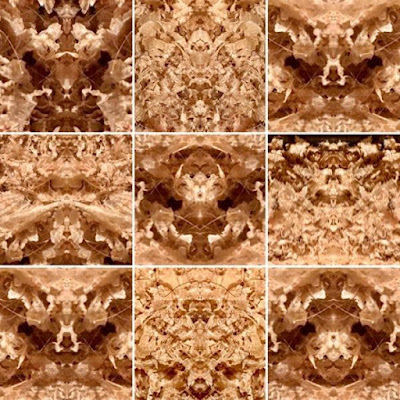 .
I've undergone over the past several months what I sometimes wake with a start to believe are terribly audacious but apparently irresistible desires to disseminate from a new category of Art I call "kaleidograms" a series of prints of very complex symmetrical designs. Each, framed in squares of 8.25" x 8.25", depicts a tightly ordered and ornate conglomerate “visual” that could conceivably be associated with the patterned adornments of le Palais de Versailles, the angled intricacies of the Mayan Palenque Temple of Inscriptions or the passionate barocco swells and swags of St. Peter's Cathedral in Rome.
.
The density and the perfection of the symmetries these Kaleidograms create so effortlessly is to me harrowing: suggesting the unnerving notion that insentience is as reliable a creator as sentience. The Instagram Layout App is a robot. It has no intention worthy of our definition of that word. It inexorably creates according to predetermined algorithms nothing more complicated than mirror images, which can then be mirrored again to create yet more intricate designs. If it is a stratagem for creating art, it is a brainless one.
.
Albeit with spectacular effect. Which may mean, somehow, it does create art.
.
While the phenomenon of the Instagram App may seem easy enough to understand and even dismiss in a general way, the effects of the symmetrical designs that the Layout App's mindless mirroring procedures create from the photographs subjected to it can produce outcomes both breathtakingly beautiful and unnervingly strange. Grins and scowls of griffin-like creatures suddenly peer out at you from what had once been a photo of, but now in no way resemble, densely leafed trees. Arrays of bizarre shapes or delicate filigree leap out at you from the desultory grit of a sidewalk. Weird whorls and whirls of color derived from reflections of street lights in store windows are all unimaginable transmutations. And yet each one lulls with its symmetries. It is as if we fall under an enchantress' mystical spell. However, what I'm proposing here for this show isn't as gauzy as that.
.
I confess that the description of this show's theme, Seeing the Unseeable, first made me sigh a tad dis-spiritedly. I foresaw a lot of quasi-poetic we're-all-a-part-of-an-unfathomable-mystery business too vague to appeal. But I'm hugely intrigued by the idea of the how and why of what can be seen and what can't. How to make this enterprise, as it were, 'concrete'? Might the unseeable thing not have to be an arcane mystery known only to invisible spirits, but something merely deftly or ingeniously "hidden"? Which, when pointed out, would cause us humbly and abruptly to admit the obviousness, perhaps even the mundanity. of their identity. The "unseeable" might turn out to be something we'd been staring at all the while.
.
What has been photographed for these kaleidograms, what is their content? It consists of small dry flecks of skin that I’ve scratched off my scrotum through extended hours of the passionate suffering of an exquisitely luxuriant itch under my balls sac, amassed over nearly two years of unforgivably late nights and preternaturally sinful early dawns.
.
They are made of me. The seen and unseeable me.
. 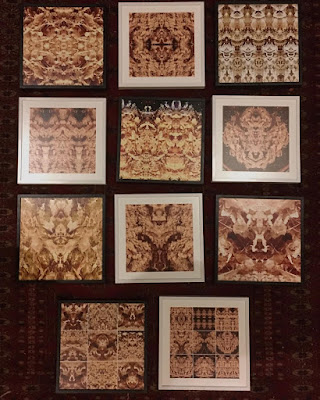 11 of the 15 kaleidograms to be included.
Posted by Guy Kettelhack at 9:51 AM