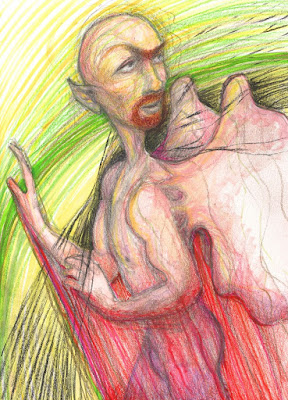 “Un-reconstituted angel, please,” you tried some
time ago to order from the disputatious vast Akashic
Record Store, when of a sudden you discovered
in your cupboard that somehow you hadn’t any more.
Not to have a bit of angel at the ready to supply its
expertise at cleaning and its excellent cuisine could
.
make existence quite the wretched bore: indeed,
a heavily egregious chore. “We’re not allowed to sell
that now,” they bellowed at you in their shifting
harmonies of major, minor thirds: it took a chorus
of a dozen souls to scream as loudly as they could
to have what they were hollering be even slightly heard.
.
“Powdered Angels lately have been turning into gritty
tasteless paste – all their powers gone to waste: holy
water now no longer lent the desiccated stuff sufficient
wherewithal to turn into the fluffy, moist and tender
nutrient it once had been that favored life: it’s now
a sandy glop – full of stop, devoid of go. Which was not,
.
to put it mildly, what The Great Redeemer had in mind.
So Angel, Un-Reconstituted is no longer something you
will find. But an angel's dried reductions could be set up
to be “fried.” You learned this meant electrified,
a process by which frozen angel filaments would realign
in parallel arrays of colors, weaving back to usefulness,
.
and finally reliably result in the arrival of that cherished
helpmeet: a fleet new angel by your side. “Be careful,
though,” the souls arose again to yell, “don’t overcook
them; even slightly singed, they have been known
spontaneously to reveal insidiously hidden portals. Some
lead to hell.” You rather thought that might be swell!
.
So you opted for la poudre d’ange prêt-à-sauté, took it
to your kitchen range, electrified its filaments a touch too
much – which splintered bits of it to crispy black. From
the hiss of its disreputable crackle now has surged this
Impresario of Impermissibility! An indolent deliverance,
a cunning halt, a cul-de-sac. You’ll never give him back.