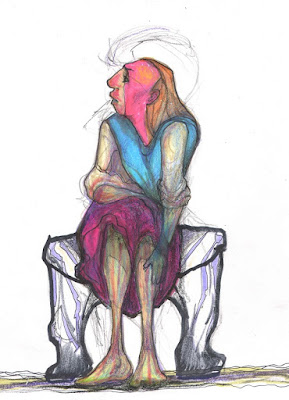 https://www.youtube.com/watch?v=EFQm70xWPQQ
.
Ever notice how, just at the pivot,
trigger, tipping point, the very brink
of the stupendous climax, just a hair’s-
breadth blink away from blasting
you ecstatically to trans-mutation
to fulfill the last requirement of your
most yearned-for trans-formation –
.
to requite the hunger for it to arrive
which, you know upon the impress
of a strictly private lifelong revelation,
has been why you had appeared, why
you’re still alive – you know how when,
just at that blink the nano-tiny last
scintilla of the thing is ready to be
.
breathed upon by God to bring about
that requisitely delicate igniting sigh –
hushed, pregnant exhalation of a hello
and goodbye – which opens all
the golden gateways to the ultimate
redefinition of trans-figuration –
ever notice, that’s when people die?
.
Presumably you haven’t, but you will,
at least if hungers as ferocious as
the ones that made Melvina spill (not fly)
off from a window sill pick you, as they
picked her, to face the sole condition
of the only realm that trapped her eye:
the unambiguous indifference of sky.

Posted by Guy Kettelhack at 8:28 PM