The Portrait Painter and the Ugly April Day 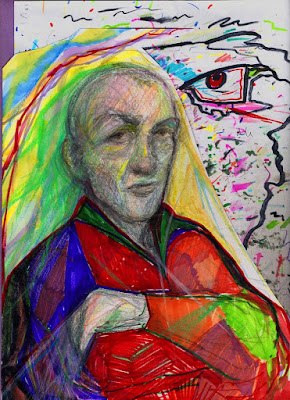 http://www.youtube.com/watch?v=4tTfwgolxhs
.
He takes his bony awkwardness into the ugly April day –
too dankly warm for May – and yet the naked trees belong
in March: that’s what humid half-baked April in New York is.
Brightness pops in here and there: forsythia: frail runty
yellow feathers sprout from scanty soil – buttering a toss
of corners in the side-walked town: he wobbles down
the pavement like a scarecrow with a tooth ache: pretty close
to true. (He muses on how art steals pain and turns it into
.
point of view.) If he is to love this city he supposes that it can’t
be only when the two of them are pretty, which Lord knows,
and he knows, they decidedly are not. Currents lurch: bipolar –
hot/cold – devil-zephyrs from the river twiddle with the un-
blessed ordinariness of people – tourists: bodies are a weight and bother, something may be flourishing but it is not sweet human pulchritude. The sun’s too rude, and flesh too blank
and pale and bulbous and mistaken to be taken seriously.
.
Mysteriously, though, he’s got to have a taste of it: he takes
his aches into a scraggly lower east side park: the kind
a neighborhood takes over rough-shod, makes its own.
It’s a tumble of pink children’s stools and hanging thin
and dinky kid-made mobiles with green paper strips: looks like
the lame attempts at fun-filled doodads in a bad commercial for
a used car lot without the cars. Bumps and weeds and scars are
what it has to show. He sits there on a bench as caustic as a crow.
.
Then he feels the red eyes in some mean graffiti drilling through
him from behind and turns around to see bold slashes of white,
red and black kick ass and suddenly, at last! he’s got the portrait
he’s been hired to paint entirely completed in his head. And
he’s a pretty good idea of how to get it onto something in
a frame instead. April doesn’t care, but why should April care?
All he knows is that he’s somewhere he’s supposed to be.
Is that enough for him? That would be enough for me.
.
.
Posted by Guy Kettelhack at 8:33 PM