If Creation has a Problem 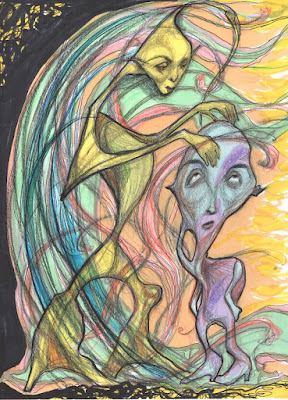 https://youtu.be/JGNgfCiXHCo
.
If Creation has a problem it is not that some
jejune or inattentive aspect of the Maker put
the purple where the blue should be, or that
too many flies or too few bees were requisitioned
for immediate delivery to swamps or farms
or linden trees, or that a vitriolic reflex has
become the norm in homo sapiens communities.
Creation does the work we call creation for no
other reason than it has no other thing to do.
.
From its points of view, it comes out perfectly.
That it may not suit our purpose is not only not
a problem but not so much as a gluon of concern
to that mysterious proclivity that pumps out
theater props and futons and banana splits
and digital antiphonally remixed covers for
the songs you never liked. Not one bit of creation
isn’t spiked to make somebody doped or sober,
or to waver over and above the greater part of All
.
so that the greater part of All and it will likely
never meet – until by chance an unsuspected
several drops of it break through your mother’s
skin into her reproductive system like invading
mitochondria to reassort the synthesizing DNA
that had already started to construe the interesting
unfathomable thing that one day would be you.
What problem to Creation could you be?
Uh-oh. Irrefutably, perhaps, one day we’ll see.
.
.
Posted by Guy Kettelhack at 10:53 AM