Today Instead of a Poem 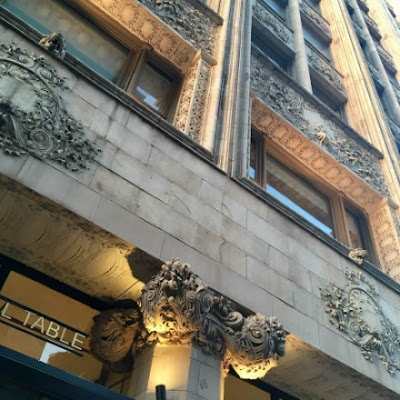 .
It’s impossible to do photographic justice to Louis Sullivan’s 1897 Bayard-Condict Building on Bleecker Street head-on. I assert this not only on the basis of my own stumbling efforts to accomplish the feat but on seeing any of photographs of the building done by pro photographers which depict its face in full height. To take a full frontal shot of it requires backing down Crosby Street toward East Houston far enough away to get the measure of the whole long rectangular rise of it - a distance which all but cancels out the music of the tension between its voluptuous adornment and audacious verticality — what had been for its time perhaps the first tall building in the city so frankly to exult in being tall.
.
But sometimes, in certain conditions of angle and light (such as were afforded by today’s golden evening), I’ll find I’ve managed to steal a shot of it which almost by accident suggests its elegant verticality and its exquisite carving as the wonderful marriage of bold height and constrained delicacy it is. If you’re lucky you can do a swift visual poem of it. But I don’t know who’s equal to the task of doing more. Sure ain’t me.
.
But oh, Mr Sullivan! I don’t know when I’ve felt more grateful to an architect than I do to you for giving New York this wonderful gift.
.
Posted by Guy Kettelhack at 7:00 PM