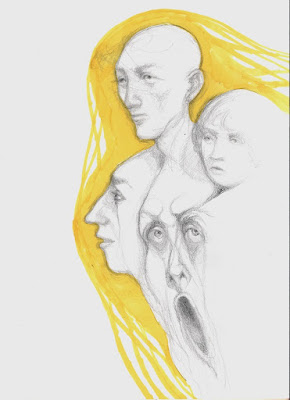 for Kenny Gatta
.
https://www.youtube.com/watch?v=Tdzq_xV0Bp0
.
Death assumed a form sufficient to convince me
that it wanted me to draw its portrait. Its sufficiency
consisted not in anything I actually could make out
.
of what it looked like. I only knew that it was there.
Although I’d say I somehow knew it wasn’t moving.
So that if on one side of Death a breeze were blowing
.
leaves toward Death, the leaves would simply stop
and drop when they encountered Death. Death told
me that it didn’t matter what I thought it looked like,
.
only that I make it look like something recognizable.
Death was deathly tired of not seeming to be there,
as if it weren’t even air. Even though we living think
.
we know of Death, Death knows we don’t. So Death
said draw whatever comes to you and we’ll be that.
Four faces came to me, one horror-movie one with
.
drooping mouth was my concession to cliché. But
actually Death liked that one best. The rest, Death
said, were merely heads and didn’t mean a thing.
.
And then I got it: no life means a thing to death.
It wouldn’t know it if it killed it, which it does.
Its business is transmogrifying Is to Was. It isn’t
.
anything itself. I wondered then what told me
to create this thing. Perhaps it wasn’t Death. Perhaps
no thing is Death, perhaps there is no Death at all.

Perhaps infinity, eternity and we effect a simple sort
of unity, a dawn. Where nothing’s really going on.
And yet someone I loved is indefatigably gone.

Posted by Guy Kettelhack at 9:52 PM