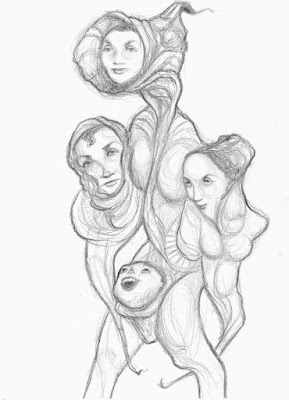 .
https://youtu.be/nM4386kP9ec
.
Anthropomorphism stamps at the gate,
oft’ in soft-penciled Dickensian garb:
chafes when it can’t lift the latch to ablate
all the haughty reflexive resistance to it.
It’s a pinch and a sting and a barb
.
to the arts-savvy tasteful sophisticate
who can’t abide the jejune dunderheaded
buffoon who believes the best art
is a Disney cartoon. Disney cartoons
have their place in Art’s pantheon’s great
.
sprawling spaces — but surely none equals
the subversive wit of a Jasper Johns’ target?
Or any perversity learned from his dada,
the duomo of Dada! — cher Marcel Duchamp.
The further away from the human we get,
.
the more of the human we learn to forget,
ergo to escape to a space beyond space
in the skies! The more we can banish cliché
from our eyes, the more we’ll make art
the well-bred will not have to despise.

But anthropomorphism still has the edge:
it easily pushes upstarts off the ledge:
it knows that no human mind ever
stops leaning first into itself to uncover
a meaning. We’re the measure of all we
.
can see. Being human, how else could it be?
So anthropomorphism quickens and thickens.
Who best make its point but these
crickety heads, dressed like characters
blessed and unblessed by Charles Dickens?
.
Posted by Guy Kettelhack at 8:13 PM