Gender Fluidity, Ghosts and a Plague 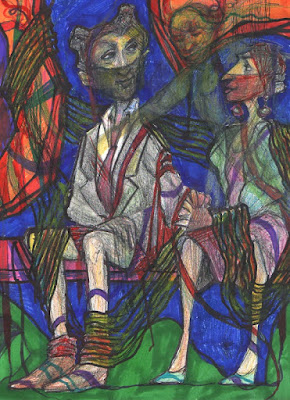 https://youtu.be/fOPEQbDwrdw.“A ghost has just formed to the right of my head,”Bette decides to confide to her date, the transsexual Fred(f to m) who tells Bette (m to f) it derives from Samarkand,an ancient and opulent city in southern Uzbekistan.Back when Fred ran refreshments (his kale and mint frappewas a smash – over there where they now offered craplike a fig newton chili that made you rip open your collar)the spirit of Ibn Battuta arrived: fourteenth century scholar,a Muslim whom many admired. Wikipedia lauds him;and often when Fred says hello, he applauds him..But Bette was regaled far more now by the fab tricksBatutta brought off: a sense in the night that rare fabricsenfolded them lightly, dreaming in gleaming embracesBatutta said he’d undergone in the most sacred placeswhere people who, struck by the plague of the day,would first pray to recover, and then simply pray.Fred said that Batutta was drawn by our masks,which he thought signaled gender fluidity. He asks“what’s it like, Bette, to be reborn and become one another?”“At once,” she replies, “we’re sister, brother, father, mother.”