What I’m Careful to Say 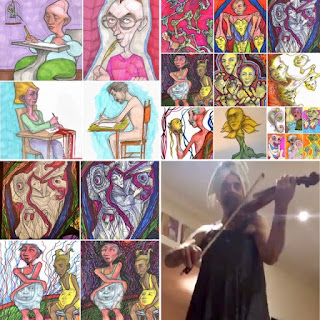 (from a response to a dear friend who was concerned because one of my recent poems seemed to indicate I was maybe feeling bleak. As is usual with such expressions of concern I started to pontificate in the usual way about the usual ‘suspects’ - aspects of the natures of Creation - but which I kinda liked when I was done   so here it is.)

What I’m careful to say (because it strikes me as true not as any conscious coverup) about any drawing or poem for which I seem to be the sole generator is that they seem respectively to draw & write themselves. I don’t know where they come from or even what their mission is for themselves: I’m just the hired hand who wields the physical instruments of their construction or destruction. I don’t write in a ‘trance’ but I am aware that I do everything (I mean in every moment of my waking life) in a kind of slightly altered state; I was tempted to say meditative but that’s too loaded a word. It is a condition of attention which has no connection I can feel to whoever ‘me’ is. It is a self-forgetting not a self-‘finding’ - whatever that may be. The ‘self’ doesn’t exist except as a word made of letters from a vocabulary - a sort of stand-in (as all words are) for an existentially both precise and immense ‘felt’ human experience so powerful that it pushes you to the brink of attempting the ridiculous task of describing it, to do it justice. Experience is immune to description.

Those artists known as great are those who through some deeply magic sleight-of-hand are able to bring to life the illusion that something can with any justice be said. Shakespeare and Emily Dickinson being two. I don’t count myself among them but I do dare to say I am sometimes afforded what seems like an intimate glimpse of what they do - catching them undressed in the act of doing it, sort of. But that’s probably still my hubris.

They both come to mind because each refuses to say what he or she ‘believes’. They (via each’s style: and “style,” as Quentin Crisp reminds us, “in the broadest sense of all, is consciousness”) are abundantly present - who could mistake either of their ‘voices’ for any other - but their business is not to ‘bare’ or reveal themselves. ‘Self’ is the least interesting aspect of what they do. They’re too busy creating autonomous worlds. They’re less like writers than “God” - another silly word or stand-in for Creation. Who cares who creates anything? Who can’t care about what is created?

So I’m never the poem or the drawing I do. I especially give Emily the nod here for demonstrating how to appear to be speaking in first-person - the single letter word “I” is to be found all over the place in her work - but I defy anyone to put an equals sign between it & Miss Emily D. Who in the cosmos knows who that is? Or who any of us is?

The guy who calls himself mostly for convenience sake, Guy.
Posted by Guy Kettelhack at 10:27 AM