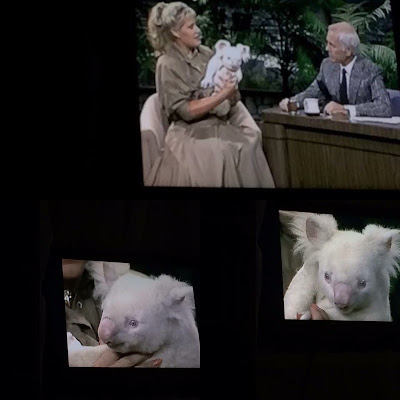 In the increasingly surreal little-cosmos-of-my-own I ever more happily inhabit (there may be reason to be alarmed by this), a cosmos in which Johnny Carson has come back to full life in the form & content of AntennaTV's replays of his shows from the late '70s to early '90s, I last night learned the following: Koala bears (misnomer, they're marsupials) sleep 20 hours a day and eat 200-500 grams of eucalyptus leaves a day, presumably during the few hours they're awake. A trip to Google's cosmos tells me this is because 'gum leaves', of which eucalyptus leaves are an example, are so hard to digest.

Okay, so we are presented with several luridly fascinating bits of info here, one the putative focus, the other the inescapable gestalt. The putative focus is dual: the strange persistence of life on earth, not only in the case of the koala 'bear' which has gone to such lengths to accommodate the only food its destiny has provided for it, but in the example of Johnny Carson holding the koala in his awkward Midwest way, successfully attempting to be us, in whose arms we are invited to imagine the koala has also just been placed. It has awfully long claws. And while our inveterate anthropomorphism will insist that we find its face "cute", in fact those eyes yield nothing of the koala's actual mind: we are looking into the outer space of an unknowable consciousness. Which brings us to the inescapable gestalt: Johnny Carson's remarkable poise and cool/warm ability to ingest the eucalyptus leaves he is (one supposes one must say 'was' but I'm secure in my own certainty he's as absolutely alive at 11 pm on AntennaTV as he ever was) forced to eat. This also amounts to looking into the outer space of an unknowable consciousness. Johnny Carson was, in his way, the perfect protagonist of a Beckett play. He, therefore, is us, because we're all that too.

Now where did I put those eucalyptus leaves?