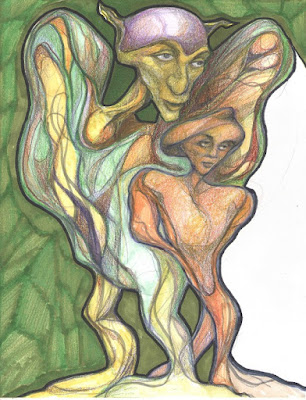 Each day announces there will be another menu
but withholds particulars until you sit down in its ever
subtly altered venue – tinkle the obliging chimes you’ll
find most times, right on the table, for the ghostly cipher

of a waiter – who (mostly sooner, rarely later) will lay out
the unforeseen repast. Now, you would probably not last
if there were not an understanding here – which is
to say, a certain reverence on its and your part for

the idiosyncratic and the queer – a gleeful receptivity
to no holds barred at all. It’s surely this implicit invitation
which accounts for this audacious daily culinary psychic
windfall – this grand amassing on the plate of broiled

expectations – lightly dusted with minced bits of love
and grated hate. You like the minuscule arrival – piquant
survival – of the plaintive sigh (in broth) – with its faint funky
hint of sloth; and savor, when it’s possible, the stinging

heat of lust – more searing when it’s impermissible –
fresh out of trust. You feast occasionally on the subtleties
of smile, though generally not while forking in the load
of guile which seems to bloat you up on random Tuesdays.


You rather like the goose that lays the egghead who politely
cracks his shell-y skull into your bowl to ply you with his
intellectually indefensible dull hell: you find the whole
thing swell. And all you ever have to do is ring the bell.