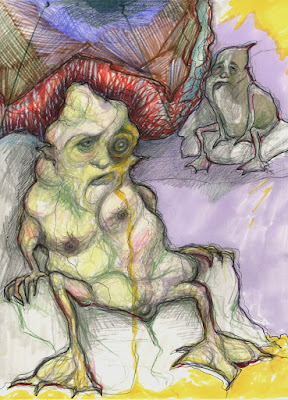 https://youtu.be/9qHGIdii-ss
.
What I would say if I were you, I’ve no idea, although
I must confess I am lasciviously curious to have a go
at being you, that is, to look and sound and move
like you while inside being me, thereby to prove
.
no one will care who’s at the helm of your identity.
In fact the thrill that I might overwhelm your entity
with crude shenanigans that lewdly put you on display
as if you’d dumped your dumbass self upon a shelf to play
.
an even ruder role than usual is a beguiling possibility –
I think I’ll do it! But – whoa. (Oh!) No, no. The imbecility
of what is likely to ensue as I eschew my body to become
the thing inside whatever you have done to your glum
.
flesh and then to watch you take the likely copy-cat revenge
you’d carry out ineptly: climbing into my skin to avenge
the wretched mess to which I’d have subjected
you by torturing my soma until thoroughly infected
.
with your bestially unholy pestilence, so that it sweats
and stinks, offends like the aroma I recall abets
the awful rot and wreck of you that I’ll be caged in.
Now I wonder why in hell I’d want to have engaged in
.
anything as sordid and unbalanced a catastrophe
as making me climb into you, or you climb into me.
So forget this letter, burn it. Don’t admit you’ve seen it.
Pretend I didn’t send it. Pretend I didn’t mean it.
.
(Threats of a Violent Act are what sponsor
the virulent flirting of monster and monster.
But who said the point was to soothe?
The course of true love never did run smooth.)
.
.
Posted by Guy Kettelhack at 1:21 PM