Sometimes She Turns Up in Murderers 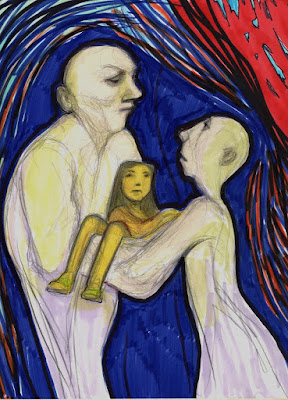 https://youtu.be/M7oPAqnDv0g
.
Sometimes she turns up in murderers — and when
fascist flags are unfurled, she’s often the impulse
in those who salute the enflaming pursuit of the flag
.
and its world — she’s the final accoutrement to which
the psyche must turn for its laws. She is, in a word,
the cause. After packing its foolscap and foibles
.
and folderol into its factory — gotten itself into gear —
only then will a Conscience decide to appear, and her
brand is the one that will most avail; she makes all
.
the stodgy ones pale. No other conscience can do what
she can to our inward allegiances, male, trans or female –
that is, can release her containing companion from
.
leasing its life to the tedious labor of moral behavior.
She thinks a conscience is nonsense. She makes you
the lone one at bat. No other conscience does that.
.
She is what gives you the leave to do anything you
want to do. Sometimes it aligns with the sociopathic.
At others it hovers and spins to the center of what is
.
exactly true. She’ll have left all of that up to you. She’ll
have gone elsewhere to play. Pinning a note to the door
of your heart: “Have a day full of dangerous volupté.”
.
Posted by Guy Kettelhack at 10:12 AM