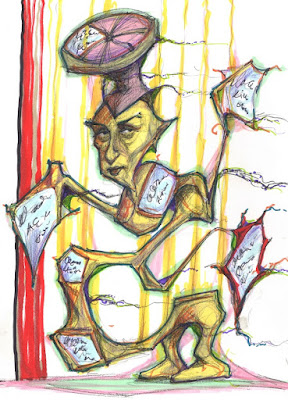 mutter, stutter, crow or croon about the moon, or suffer
any rude collusion with the ears, as if it were the music of
.
the spheres – that won’t allay nor banish fears nor have
the least intention to become a solipsistic metaphor of
.
so-called “heart” to make it break apart inside a trope,
or force it into the somatic undesirable reality, of tears.
.
It’s time to do away with commas setting up faux-mystical
pretentious clauses like the one you just saw separate
.
“reality” from “of”. It’s time to write a poem that has zilch
to do with “love”. It’s time to scrub ironic quote marks off
.
of everything. It’s time to write a poem that cannot, ergo
will not, insist it is a poem. That’ll show ‘em. Show whom?
.
you ask. Listing that’s a tedious task. Anyway, you know
already. The seven hundred sixteen poet chums of
.
your Aunt Betty. The Huns who rule poetic schools
like anatreptic ghouls, the ones that school noetic fools.
.
Posted by Guy Kettelhack at 11:05 PM