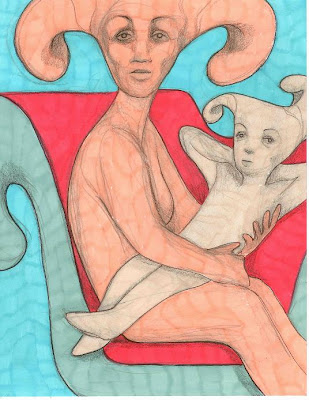 Attention must be paid –
but the querying
glance is expensive.
Answers are worrying.

Questions hoarded
mutely in the eyes
go far beyond what’s
ever possible, or wise.

Be wary of whoever
seems to want to chat.
They always want
much more than that.

.
Posted by Guy Kettelhack at 4:38 PM No comments: 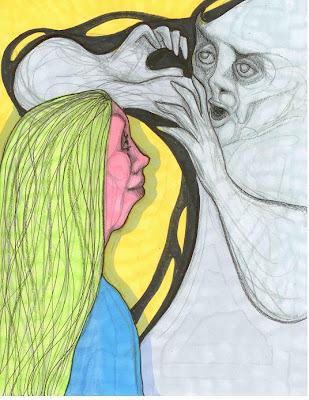 It either
is afraid
of something
it can’t see,

or I can’t see.
Neither case
is interesting
to me. 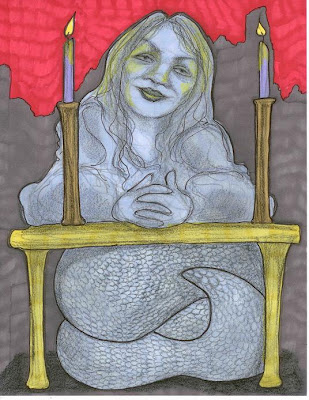 She’s nothing if not practical –
indeed, among her several premises
the most inarguable is that
if you want to save your sanity
you’d better learn how better to behave.

She’s happy to point out
the myriad absurdities
with which you cram your psychic cave –
and if she claims to offer therapy at all
it surely must at heart be cognitive:

revealing all the fixes faulty thinking
gets you into: sinking you into despair –
therefrom to summon up new strategies,
with her, to live your life – in her intensive
care. But ah, she’s got you there.

Quivering in revelations not entirely
your own, you’re prone, she knows,
to other more mysterious
investigations – to be pursued
with one immensely secret aim:

to underscore that this is her,
not your, mind-fucking game. You’re

a brand new burning bush! –
and she’s the one who grew it.
Doesn’t mean you shouldn’t do it.

Harold Often Takes a Nap Upon the Toilet 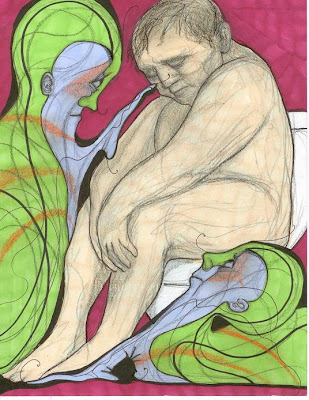 We Sense It Had To Do With Blue 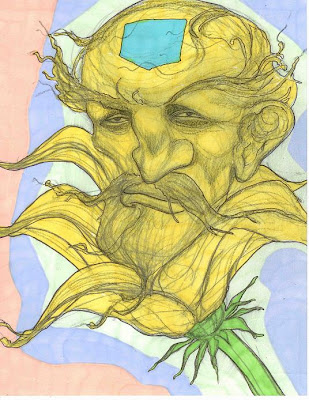 an inexplicability which clearly warranted
inspection. To gaze into the blue amid
the blazing yellow hue surrounding the intensity
of some unfathomed predilection in the shaped

projection of the artist’s face did not
extend itself, or lend itself, or in the least
propend itself into a revelation. Its preternatural
ribonucleic mix appeared quixotically

to coalesce into some ever-fresh determination
to achieve an aim for which we could not then
and cannot now produce a name. And yet,
when, with a gulp, we watched it rot abruptly

into pulp, we felt a residue of strangely
clinging shame – as if we’d missed a crucial
floral moral. We sense it had to do with blue.
It may, as well, have had to do with you.

.
Posted by Guy Kettelhack at 2:27 PM No comments: 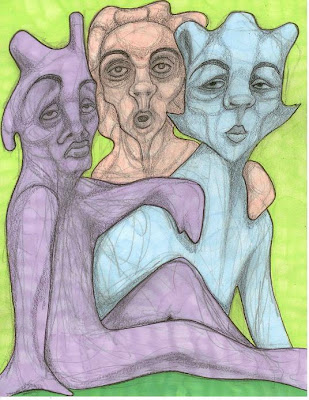 As close as they may seem to be to one another
every brother in the trio has a highly isolated
secret life. In public their triumvirate’s prevailed

despite the silent gales which separately assail
them: seek to breach the barriers of their inviolate
interiors – risking terrifying strife. One would like

of Rastafarian folklore. These are just the easy things.
More queasy things might be divulged. The really
shameful sweetnesses which each indulges solo

in his room loom like the shadows of unfathomable
doom – or would, applying measures more than likely
held by you and me. Their sin: committing truancy:

abandoning the seamless fluency of the expected.
All that really interests is rejected. Unexpressed,
their hearts abate. Perhaps we can relate.

Yet Here He Was 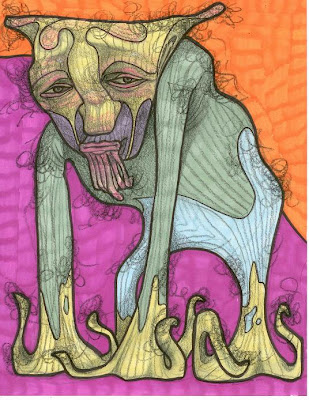 some project to extinguish
all that made him so intolerably singular.
The internal psychological regalia

he’d co-opted to pretend that he
was male was doomed, of course, to fail.
He lacked all trace of genitalia.

He lacked, in fact, a single clue
about his place in his infernally
capacious Universe.

He’d sooner curse the whole
than to embrace one tiny aspect
of the horror of his soul.

Everything was sorrowfully wrong:
eternal proof of his exclusion.
Nothing didn’t long for an inclusion.

All was empty buzz.
Yet here he was.
God’s navel fuzz. 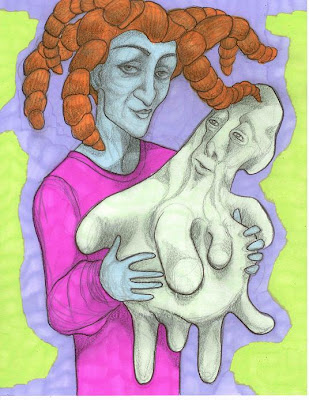 Persistence is the key.
When introduced to somebody
whose physiognomy

is too distracting to ignore –
don’t redden while attempting to address the floor.
Peer into the being’s mien as if you wanted more –

because, my dear, you do.
Do not pretend you don’t desire a further view.
They’ll know it isn’t true. 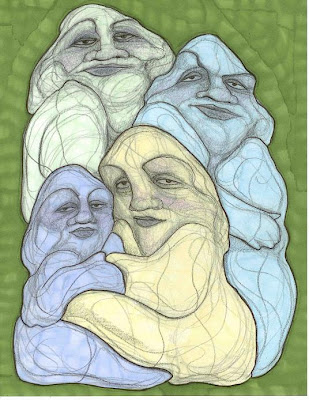 They don’t seem a departure
from my daily enterprise.
They’ve stumbled from
the same menagerie whose

affectionately come to prize.
They look me in the eyes –
entire in their Irony and nuance:
phenomena I recognize.

Neither restive nor belligerent –
they do not look unwise. But
they’ve not one damned thing
to say. Guess I’ll go away. 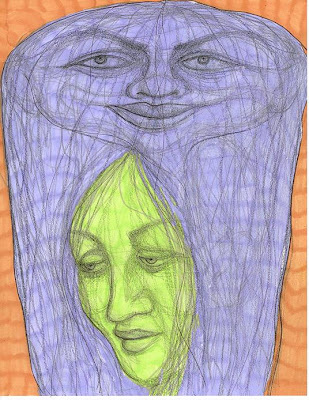 We know you’d like an explanation,
darling, but there isn’t one.
Or if there is, it more than likely isn’t fun.

As far as we can ascertain,
not one iota of a reason we’ve inferred
will manage in the least to entertain.

We find no prologue, plot or dénouement –
and, God knows, no finale.
The business is banal. We

cannot tell you what you see
is what you'll get. Try
to bet it will be, and you’ll lose.

That, at any rate, amounts
to most of what
we’d offer as our views –

except of course for one phenomenon
we find beguiling. Everybody,
unaccountably, is smiling.

Once More, With Feeling

Well, look
at that! 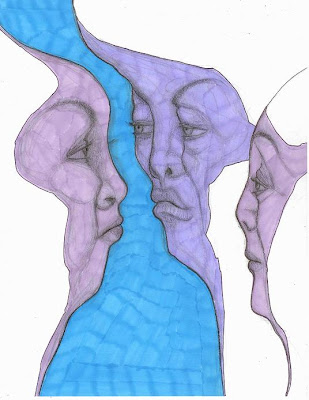 Today I spoke
with someone’s
mother. Everyone is
someone’s mother,

of expectation
born of yearning:
love will be returned.
And here we’re

sitting, chatting, feeling
spurned. I’d say
let’s grab the Cosmos
by the tits and suckle it


until it fits – which
it already does.
Home is air.
We’re there. 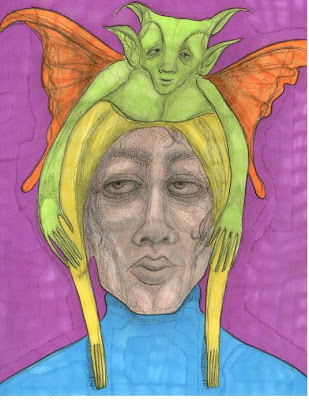 sitting
on
your head.

.
Posted by Guy Kettelhack at 3:06 PM No comments: 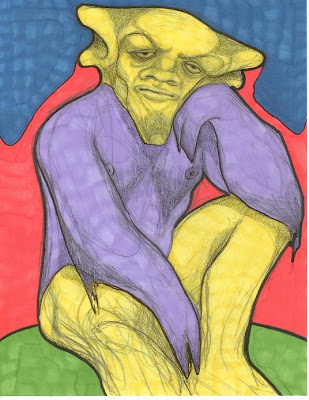 Sitting In the full
fat middle
of the miracle
of being,

you don’t know
what to do.
How can this
be true?

Existence is,
at its minutest
least,
its own reward.

Surely you
should celebrate!
Not be
beastly bored.

.
Posted by Guy Kettelhack at 6:05 PM No comments:

Prodding for the Prize 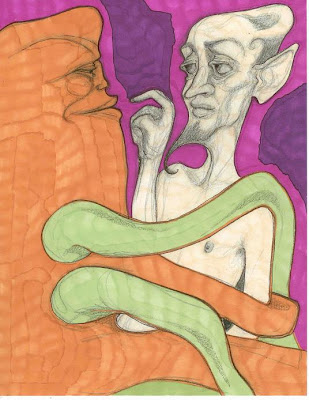 (normally we don’t intrude
on lewd activities pursued
by creatures in the nude –
at best, it’s rude):

but this odd couple’s
importuning and rebuttal –
all so awkward
and unsubtle! –

couldn’t not
distract our eyes.
Sex! Hexed, mindless, blind –
prodding for the prize.

.
Posted by Guy Kettelhack at 4:35 PM No comments: 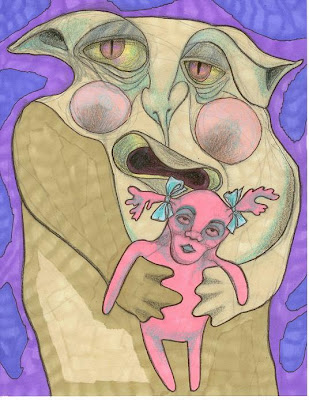 Dolly
seems to have
an inside track.

Clutch her
in a panic, she
won’t clutch you back.

She doesn’t need
the reassurance
you do.

Is it golly-
jolly-dolly
voodoo?

While
your brain’s
a fearful clatter, 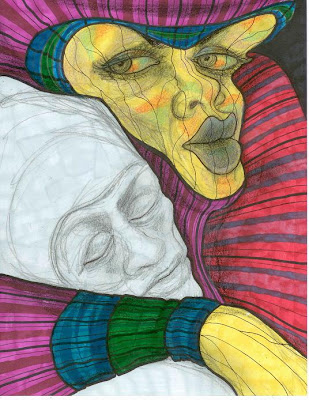 The alignments
he’s made
with Existence

will come
to his aid
at the end. 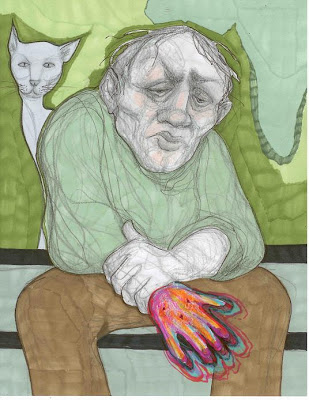 body parts: insisting
on existing in a grumpy
dissolute autonomy:
ready to go off and sulk

and cause the rest of his
half-conscious frame
indifferent pain:
take him to the portal

of the mortal. Now he’s
passing gas: a razzberry
fat splat of fart. Life
does not resemble art.

But feel the lurid
surge and tingle:
look at all that red.
Can’t call this dead. 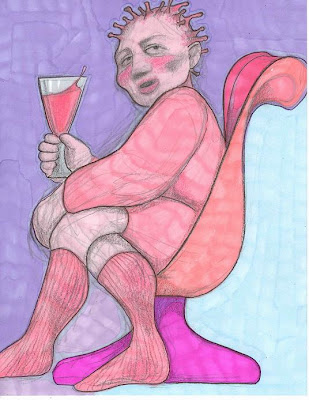 When in the zone,
and drinking
Peach Surprise

.
Posted by Guy Kettelhack at 3:30 PM No comments:

Why You’re Losing It 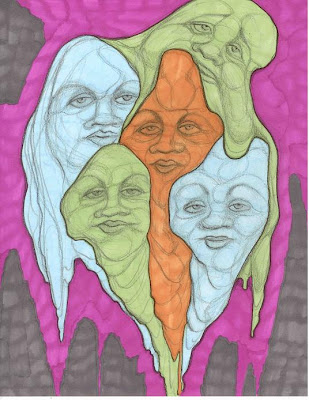 We thought we ought
to let you know
the several placidly

have all begun to melt.
By now it’s something
you’ll have felt. 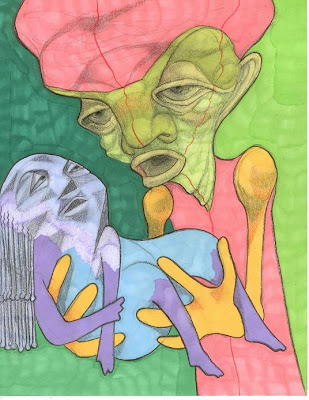 Strange, the art
he stumbled on today –
that brushed his heart –
and hushed it with dismay –
.
Posted by Guy Kettelhack at 3:21 PM No comments: 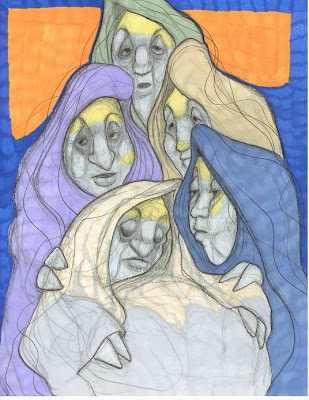 Aspects of a dying season, dream or mind
amass around each other at the end:
troglodytic nuns who find, to leave behind,
one last expression of experience they might
extend to the conundrum coming after:

enduring echo of an enigmatic laughter –
alluring strangeness – proprietary graces
from their priory – seductive whiff of existential
estuary – swift demonstration of the basis
for the theory that they were necessary.

Sometimes in the Vast Magenta Night 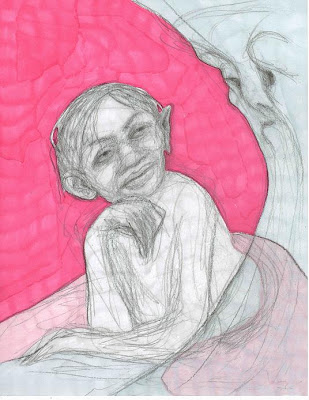 Sometimes in the vast
magenta night
a light excitement

of columnar air arises,
wakes you up,
assumes a likeness

to the human
physiognomy sufficient
to permit you to imagine

(as sometimes
happens when
the air’s ill-bred),

you have a spat with it
instead, inhale it –
exhale it – until

it’s dead: and you are
safely able to go
back to bed.

.
Posted by Guy Kettelhack at 4:11 PM No comments: 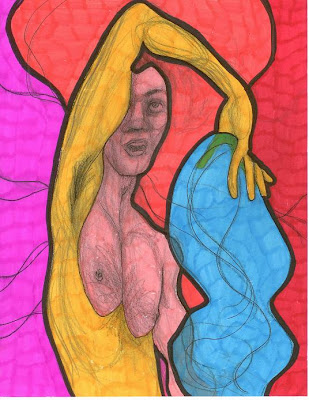 But there
you go again,
imagining you have

the least idea
what time is.

The Oracle in Hand 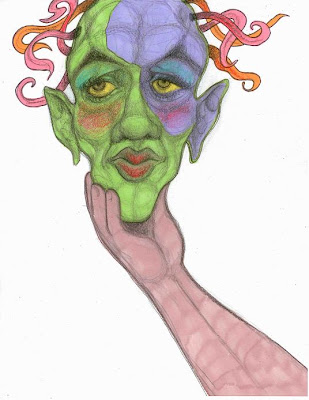 +
The Oracle in hand had been remanded into service by dimensionally
zealous scholars, overseeing bureaucrats and activists who claimed
they had divined from their review of the Akashic Records
that the cosmic history therein was biased toward innumerable
inferences deriving from innumerable premises
they did not hold.
+
So, on authority they claimed was absolute, descending as they
claimed it did from fundamental existential laws of which all energy
and matter were the constituted product, they proceeded
to abduct the Oracle, coerce her into lecturing
the Universe about its vast egregious sin: in short,
to make her scold.
+
But he or she or it who tries to force an Oracle to speak
can never win. Perhaps we should be grateful
that we didn’t hear what, had she talked,
she’d have foretold.

Now You’ve Gone and Done It 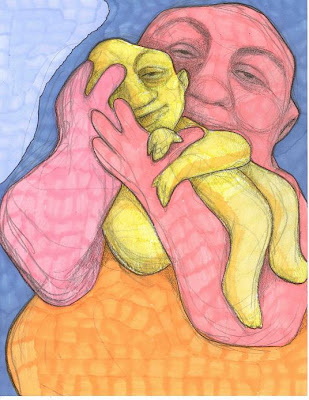 and done it.
Propagated progeny.

Was that
entirely astute?

The Season of Suicidal Chickens 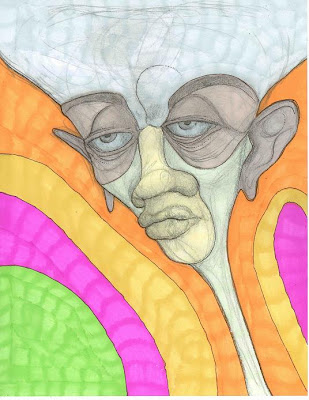 Who asked
to be here?

Weeks away
from the infernal
vernal equinox –

Bewilderment
will not relent.

Chickens
fantasize
about a fox.

.
Posted by Guy Kettelhack at 1:32 PM No comments:

Analysis of the Shebang 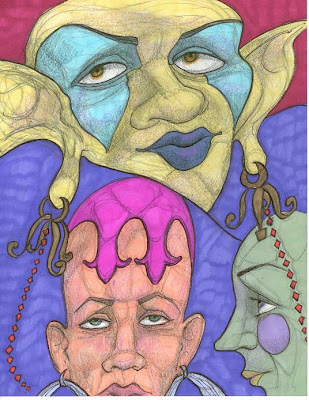 for Mardi Gras
but tell them they

“What algebra?”
they will complain.
“Exactly!”
you’ll explain.

.
Posted by Guy Kettelhack at 3:59 PM No comments: 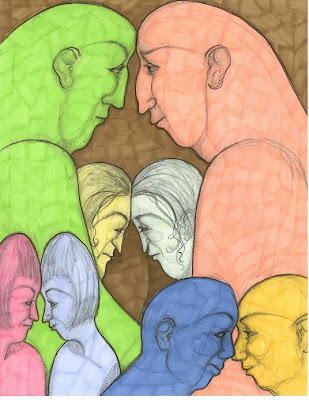 Soul wants
to encounter you
eye to eye:

open up
your solipsism
to its psychic sky:

get about
the business
of replacing why

with what –
embracing and
not but.

.
Posted by Guy Kettelhack at 3:01 PM No comments:

Though they entirely lack rhythm,
three exasperating aspects
of your latest psychic schism
clomp around and dance and yell
until you think you’ll lose your mind.
Which is, of course, absurd
since they amount to all the mind
you currently can find – and they’re

not going anywhere. You think sweet
thoughts: perhaps they’ll sense you
care and they’ll stop being raucous.
But they keep up the ruckus.
“Don’t like it? Fuck us.”
It’s gone from worse to worst.
You think you’ll burst. And yet
you don’t. You guess you won’t.

This Intramural Sport of Thinking 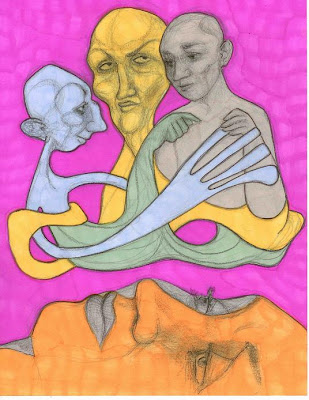 Playing fast and loose –
cavorting with morphology –
is only part of it:
this intramural sport of thinking

with your glasses off,
at rare myopic visions
which assume unconscious
light is naturally part of sight:

lamps. Everything revamps:
regales. Color is outrageously
correct: until you get up,
and it pales.

.
Posted by Guy Kettelhack at 3:38 PM No comments: