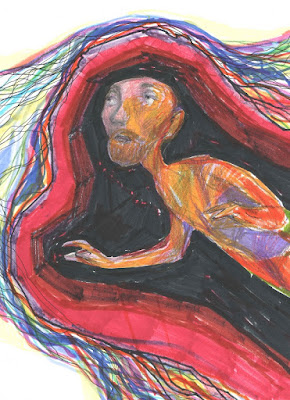 https://youtu.be/J_oLNgxuuaM
.
Existence only can begin
whatever moment I decide
to render it the magnanimity
of lending it my notice.
.
My decisions are what bring
me a proximity to ne plus ultra
truths which will libidinously
cuddle with the ruling culture
.
of my nature. If I blink and think
of it, it’s there. Having seen its
what- and whereness gives me
all the loosy goosy juice I need
.
to glide and dive down like a dove
or vulture on another loopy ride
to such appealing solipsistic
symbols of some sanctity as are
.
supposed in whispers to reside,
or to lurch, in a lotus or a church.
Peace, I hear, is what I ought to
seek and advertise. Not the bold,
.
cold, outsized full abandon that
I prize, and am determined
I will have the balls, one hollow
midnight very soon, to realize.
.
Still, dreams can
be stillbirths,
you won’t always
come out alive.
.
Posted by Guy Kettelhack at 10:24 PM No comments: 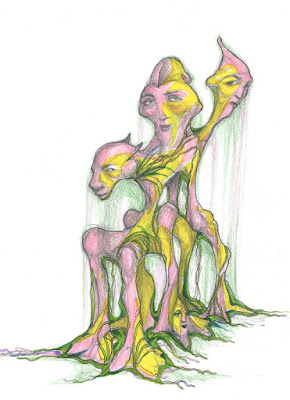 https://youtu.be/raw4FHueeWY
.
Lately, straining to be decorous,
my colored pens and pencils
have begun again to crave a thin
containing outline of the kind their
blunted dried-up forebears used
.
to wrap around much simpler
shapes and creatures years ago.
Drawings cleaving to a limpid flow
were thought more tasteful then,
as who could say they weren’t?
.
Then in the middle of their restless
disbelieving strategizing heart
was bred collectively an ideological
deterrent to confining line, which
caused each sketch of scapula
.
and spine and clavicle and radius
and humerus and pelvis to contract
artistic osteoporosis which induced
their melt-down to a destiny which
made the formless stuff unsellable.
.
Be done with the amorphous!
Why pretend to hold what once
was told untellable? Crisp indelible
exactitude is now the cure they’re
very sure they must pursue.
.
That’s what, directing my slave
hands to hold them hovering above
the vacant sheet below, my colored
pens and pencils then went down
to do. Detail the secret view.
.
Posted by Guy Kettelhack at 10:56 PM No comments: 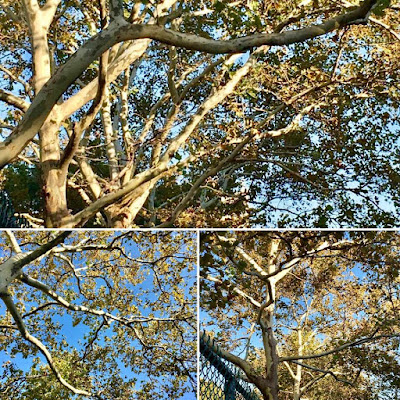 A spectacle, those
Sycamore trees!
Septembering sexily
into a breeze,
.
beckoning me on
East Second Street,
hectoring me
to follow their beat!
.

Posted by Guy Kettelhack at 3:08 PM No comments: 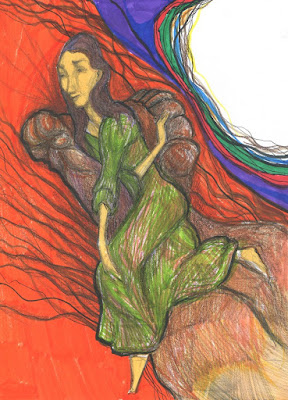 
Anna O let go from the bursting seams
of the vault of her dreams the first
tendrils and streams of the onset of what
German doctors had by 1880 long
weightily labeled hysteria. Studying
.
instances of the eruptive gestalt of
the ill-passioned heart and irrational
mind of one Fräulein Bertha Pappenheim,
Breuer and Freud believed they were making
their very first leap to and into the Void,
.
the vast nasty realm of Unknowing: they’d
opened the lid to the id. But what was
all that but a big fart of empty abstraction?
Freud called it Unconscious, which wasn’t
much help. By now Bertha Pappenheim was
.
Anna O in case history abstracts. First feeling
depleted, annoyed and defeated – eventually
she felt fine. Freud and Breuer and she
must have felt they had done something
interesting and very likely they had. Anna O
.
slept in books while Bertha went on as
a woman of no special consequence. But
I think the show Anna O would put on for her
Breuer and Freud – her twitches, her fairy
tale ramblings, her screeching unreasonably
.
in the street, her yowling at night or at noon,
her fractured recital of poems she wrote
on the spot which remarked in a boom
and a bark how she’d never agree to take
part or to play any creature remotely like
.
Bertha was – meant Anna O was a “me”.
Bertha Pappenheim seemed to lack any
gestalt Anna O would bestow on a flea.
But all that lies dead and unread in a book
at which fewer and fewer of us ever look.
.
Posted by Guy Kettelhack at 8:52 PM No comments: