has it run its power aground?

Or has it always played

this trick of seeming sick -

doomed by fate to fade?

Oblivious to slow or quick,

when or then, again, before - it

knows what it is, it’s more.

its favorite role as whore?

But it’s mother more to moods

than sin. Outer and inner -

of the feast. Loser and winner -

fall on it, savor its beauty's

beyond measure. Its duty’s

Posted by Guy Kettelhack at 2:12 PM No comments: 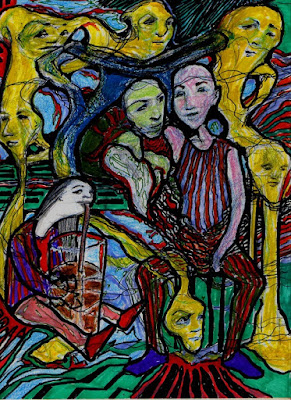 I shall rashly suggest (in the wake of finishing this in the early pre-dawn of a blizzardy February) that this may be my best work yet. By which I mean, I had a helluva good time entertaining it, that is, allowing it to entertain me. The video recitation, which is part of what I like to think makes this fly e'en through the snow, is, in fact, done in whispers - though stage whispers of the kind that should be audible. Do expect to kick up the volume, though, if it's annoyingly too soft.

half half-and-half, half cold sweet coffee – oh, to warn her

not to drink too much, whatever it might be! – is all you

wished to do and would have done had you been nearer.

But now, from her sly knowing eye you somehow also knew,

with not unwelcome certainty, it could not have been clearer

had changed and oddly prospered from this cul-de-sac: neat

pursue, look into, voyage through, the unsuspected blithering

and blandishment and random glories in a heavy down-pour

of the rest. You look around: the sky and ground are slithering

into another circumstance, a dancing fanciful romance: much

grandeur now arrives - more heads, which with yours number

as might be bound in and surrounded by fluidities of slumber

decree your destiny as be it. All this folderol! At last you see it.

Posted by Guy Kettelhack at 4:17 AM No comments: