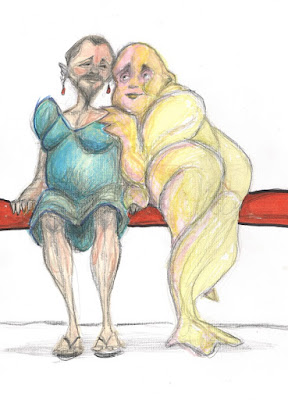 https://youtu.be/RlEJ109M6YQ
.
We should like to croon a sonnet,
tie onto a triolet a pretty bonnet -
offer it to you with some petit pantoum -
or scat like Ella - boom
.
some hiphop villanella - perform
something to cool or warm
you, as you please:
to put you at your ease,
.
give you the flavor
you might savor
most:
be the jelly on your toast.
.
We'd love to be the riot-
ously pleasurable literary diet
you consume in your preferred venue.
But first you gotta see we’re on the menu:
.
See us? Number 22 under: "Just Desserts -
Served up nude, or sporting shorts or skirts"
We're two for the price of one or less,
I'm bare-assed with a belly, he is in a dress. .
.
Posted by Guy Kettelhack at 2:45 PM No comments:

To Lick It Up 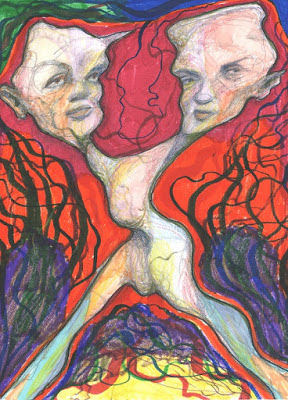 .
https://youtu.be/ewG0WJ_0Guw
.
We’re giving up on flesh. The nuzzle-funk of sweat,


smooth lanes of skin, the urge to lick it up,


tongue-map it fresh, while conjuring penumbral


paradigms of sin which sink insinuatingly into the mesh


intoning, burning, roaming, yearning for a stud in rut:


all too full of but and butt and taunt to help out much,


engendering a touch which by its jealous slavering


eventually keeps you wavering too long again between


another this and that – to do the lissome one? or blunder


into that sleek bundle: fat and sexy, pushy and expressing


rhyme schemes out of pique or out of such a lack


of expertise in the formalities it’s lost capacity to tease,


the body is a shoddy breakdown – cannot take another


enacting now the swing away from anywhere


that sex is on the docket: some pronoun in the lexicon,


whose aim is not to maim or shock it, rattles the embattled


undiscovered being you have spent a life intent


on never seeing: someone you had never thought

Posted by Guy Kettelhack at 9:06 PM No comments: 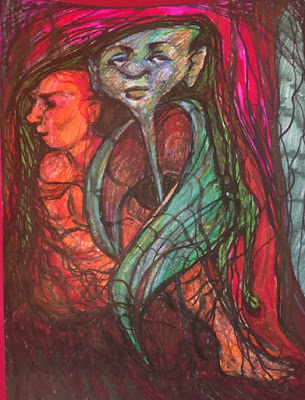 .
For D.H. Lawrence
.
https://youtu.be/Q9eCHOYBHe8
.
My creatures were spawned in lagoons inside
caves whose high gates of sharp rock resist
waves off the dark blue Tyrrhenian Sea. Home
to illustrious daughters and sons of Etruscans long
gone – children of whom they must therefore
concede that they be, brainlessly, painlessly, none
know any more than that they’re on a rock sea floor
.
of a body of water wherein they’ve heard echoing
passersby’ voices explain their cave bordered
a creature called Italy. Words that made as little
sense as all the words that I would lend them
in various forms later on of what I liked to think
could be called poetry. Why do I think it now
urgent to let the world know of a provenance
.
no one including my creatures is interested in?
Might I prod a great crowd or a god to assess their
improbable state to awaken us all to some truth
we might then be enabled to make and to bring
to Eternity’s Table – to get where we wanted to go
both here and not here? Whatever I’ve wanted
from them, whatever they’ve wanted from me,
.
my creatures keep rushing unblinkingly up from
the grieving Tyrrhenian Sea, and there’s nothing
for me to exert but an agency on their behalf to
conceive for them forms in which they can keep
whirling their lyrical chaos in swoons and small
quakes in lagoons, I believe that one day will
betake us beyond where we’ve gone or we’ll be.
.
Posted by Guy Kettelhack at 2:03 PM No comments: 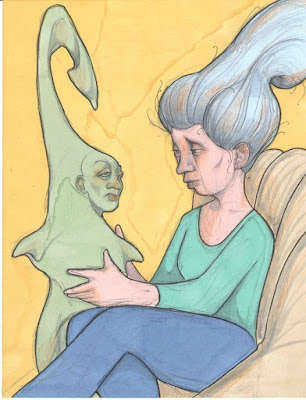 .
https://youtu.be/EOisQDpQm-8
.
Felt as pressure of a pulse –
faint convulsion of an incrementally
increasing stress of interest
in that glint wedged in the smallest
tightest bit of aperture beneath
the sharpest darkest edge – you place
.
a bet here that you probably should
try to hedge – to risk your life
on random outcomes – hoping to be
mollified by compromise when doubt
comes. Then doubt comes and becomes
the certainty of doom, which offers
.
you exactly what doom said it would:
catastrophe. But she and her imaginary
cohort weren’t the kind that ever
hedged a bet. Anyone who thought
they could procure their safety or that
there would be an end to anything
.
had lost their practicable mind. What
there always was and is and will be
is infinity: a reason to resume. Since
none of it will stop, the doom will doom,
with room for all imaginable other
possibility – including new varieties
.
of doom, including the elucidating
imbecility of thinking you could hedge
a bet, resize the risk. What risk could
you minimize? That of never being
able to withdraw? That’s not
a risk, dear. That’s the law.
.
Posted by Guy Kettelhack at 3:14 PM No comments: 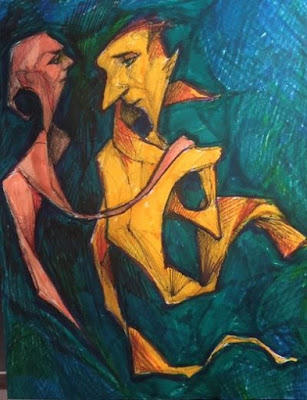 https://youtu.be/Dge2ZKxw6Dw
.
I can’t look at anything
in which I don’t project myself.
What can human thinking bring
to view except what’s on its shelf
.
already? What other
possible resort has it but
to play father, child, mother
to whatever thought it’s cut
.
from fabric it already knows?
I see a piece of quartz:
To know the word for it bestows
familiarity – a force
.
that I can wield with confidence
throughout incarnate life.
In fact, it masks incompetence –
I’ve not a clue how rife
.
it is with being I can’t speak of.
I can sit here sweating
with the block: indeed, I reek of
trying to imagine getting
.
anything I’m not. I can’t get
what I’m not. What then
can I see? What then can I let
you in to see, and when
.
will it become a revelation
worth the trouble to relate? Fuck
ineducable ignorance! I’m a station
where the brain-train stops, gets stuck.
.
Posted by Guy Kettelhack at 9:13 AM No comments: