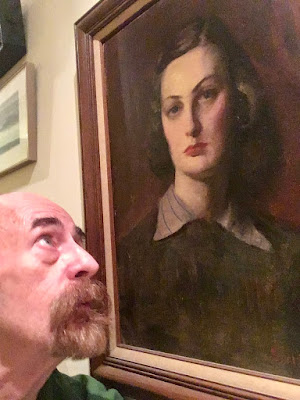 https://youtu.be/Mnd0ZgQW-u8
.
Twenty-twenty is the year we’re in.
I’m thinking Nineteen-Thirty-Eight is when
my mother sat for this reflection painted of her
in what I imagine was the quiet din of soft
.
intrigue surrounding painters in a studio
of the Art Students League, studying
this pretty young art student Alice Blake,
who’d have been on her way to twenty-one.
.
I’m sixty-eight, and looking at the girl who’ll be
my mother. I wonder if by twenty-one she’d met
my father yet. I doubt it. I’m standing looking
up at her unseeing oil eyes: I’ve spelled for her
.
my age and stage of having lived now nearly
seventeen full years since she was last alive.
By then she’d been a Kettelhack for seventy
much longer years. The dactylic Kettelhack has
.
now been left to bring me to my fame, as I wait,
not waiting, to dive into what I have no reason
not to think will be oblivion. I wonder in what
arcane idiom I might spell out my question
.
to this proto-mother Alice Blake to find out what
if any rules I ought to break before I join her
where the moon presumably don’t shine. Breaking
rules as my last act would be so very fine.

Posted by Guy Kettelhack at 10:02 PM No comments: 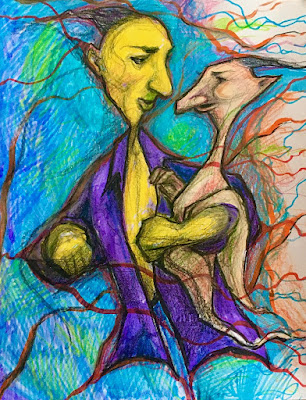 https://youtu.be/mcm9oUT-KyU
.
Poems toss and turn
and yearn ambitiously
ambiguously: coyly donning,
dropping fig leaves in
.
the windy autumns of the heart –
on the one hand they
admonish and demand –
and on the other, part
.
with every expectation
of an outcome – with
an arguably psychopathic
cool capacity for little
.
textures, small decisions,
surgically precise incisions –
self-forgetting: moments
after bringing things to heat.
.
Poets are a bit like that
as well, of course, but
they can't, quite to the degree
a poem can, be what they
.
eat. Poems self-consume:
they are the food they
cook. Which somehow gets
the poet off the hook.
.

.
Posted by Guy Kettelhack at 9:04 PM No comments: 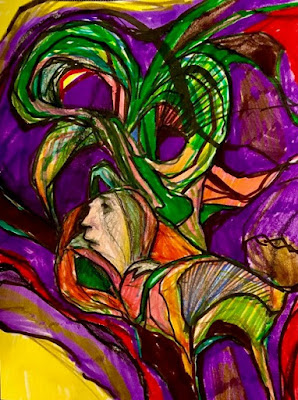