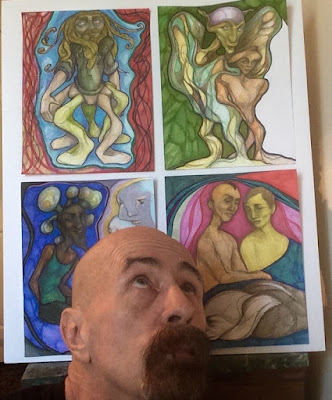 https://www.youtube.com/watch?v=C-IkuJ_DDnI
.
Lightning’s business is to devastate –
an immensity of pressure gets sufficiently
obstreperous to slash at what’s restraining it
to wrench it past itself and leap with it into
a chasm through what I imagine is exactly like
orgasm. I imagine this because I want it to feel
really, really good – to something anyway.
.
I am accused of trading only in hyperbole.
Everything’s the most to me, the best to me,
the fullest or the emptiest, the most exacting
test to me of anyone’s perceptual acuity – my
tic of a reliance on an excess of exaggeration
only indicates vacuity – to anyone, at least,
who’s not the least like me, which no one is.
.
It’s this. I’ve never healed. I’ve not been cured.
I haven’t ever felt the least assurance from
a single source that anything’s okay. Okay’s
a form of stasis. For which there is no basis.
The only cure I can construe is to exalt
and to exult in this – to be stunned by one’s
unknowing. How can one ever take a single
.
thing for what it thinks it is? It’s never normal.
There is no normal. There’d have to be a thing
exactly like another to support reporting
it was normal. There is only the immutability
of mutability. I don’t think I ever found this
terrible. I could only think it was inordinately
fun that everything’s the best, the worst,
.
the strangest and completely unforeseen,
the only one – another glimpse into a spasm
that can change the whole shebang again
and always does, will always do, and all of it
if you are paying it attention alters you,
kicks you out and through another door.
What else can it do? What else are we for?
.
Posted by Guy Kettelhack at 8:11 PM No comments:

To Get What You Deserve 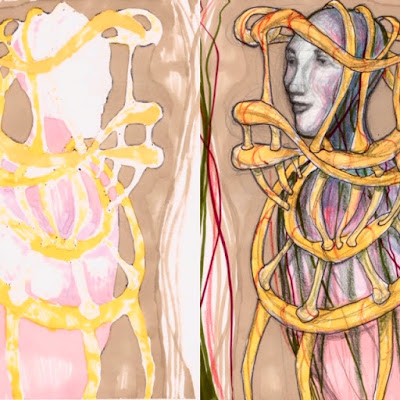 https://youtu.be/bFKIBtj-nXQ
.
Do the thing that can’t be done.
It’s simple, she began.
But only do it if it’s fun,
her admonition ran.
.
Use impossibility
as soap to wash your hands.
And take on imbecility
until it understands
.
you don’t yet know that God
is made entirely of silliness,
and you require a prod
to find a navigable willingness
.
to barbecue life on a spit
and summon up the nerve
to eat delicious bits of it
to get what you deserve.
.
Posted by Guy Kettelhack at 8:55 PM No comments: 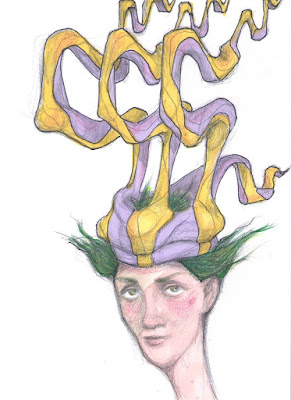 .
https://www.youtube.com/watch?v=sfi7MMYUBeI
.
Mrs. Bloom’s hat – yes, yes, yes – and a yo!
What other recourse for old Leopold’s Molly?
Get even with Steven! Put Daedalus in a chapeau –
No arrow or bow: spill the buffoon with the folly
.
of making him clown in a crown of subjection.
Looks just as good on a fellow as on a grande dame,
and would soundly forestall his arcane predilection
for folderol Steven thought had more aplomb…
.
but please end this siege of egregiously terrible crap
in this awful un-ballad, cursed verse, this invalid
excuse for besmirching this Mount Ararat of a cap
in these dunderhead heaps of word salad! –
.
let’s not be undone by – just done with – all that.
Now close in, surround it. This ain’t for sissies.
Don’t tell me you don’t want your head in that hat:
Has it the key to the lock on the heart of Ulysses?
.
Or maybe it’s Dolly Bloom’s topper.
Six of one, half a dozen of the other?
Wouldn’t that be a whopper!
Dolly’s first cousin to Leo’s grandmother.
.
Posted by Guy Kettelhack at 8:03 PM No comments: