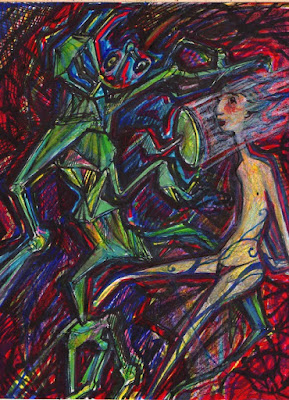 Posted by Guy Kettelhack at 1:38 AM No comments:

The Thing You Think You're In (spoken and sung) 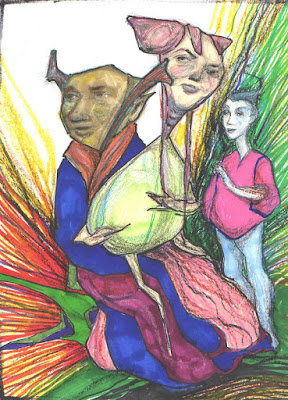 (spoken & sung)
.
https://youtu.be/mHgargyd_Rc
.
Today go do the things you say and say the things you do.
Try to find out in your usual way
if anything new is true .
about the thing you think you’re in,
or if you’ve made the cut.
If not: at least you’ve blundered in
to find at last you’ve shut
.
the door on ambiguity and found one truth intact:
agleam with sheer congruity –
your empty head’s a fact.
.
Keep your final act at bay,
blithering toward the abyss.
Get on your knees midday to pray,
slithering forward like this.
.
.

Posted by Guy Kettelhack at 2:46 AM No comments: 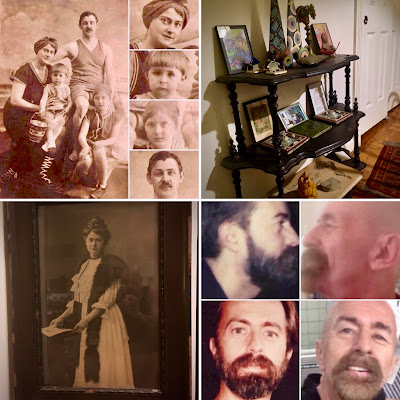 Articles of Faith
.
I just came across a piece of writing I posted about a year and a half ago about the German side of my family. Somehow, in this zeitgeist, this odd dissociative covid moment, such musings seem to have more than usual force. As the last member left of my immediate family, I guess it shouldn’t surprise me that I feel the desire, maybe even the mission, to re-discover my provenance - kind of see my place in the cosmos, a mission about which, right now, the cosmos even more than usually probably couldn’t care less.
.
Oh well!
.
^^^^^^^^^^^^^^^^^^^^^^^^^^^^^^^^^^
Feb something-or-other 2019
.
I had another moment — not the first, but they’re rare — of contemplating the German half of me, more particularly the Kettelhack half: prodded by someone on Facebook who said he’d enjoyed seeing a photo I’d posted of my father as a toddler held by his mother Elsie, his father Herman’s arm around both of them and his sister Elsie sitting at their father’s feet: a formally posed at-the-beach scene I suppose may have actually been taken at a beach such as Coney Island (since they’re wearing beachwear) but was the sort of thing in the 1910s often staged in a photographer’s studio. Formal studio family portraits were clearly fashionable then and the Kettelhack family featured here were for the moment well off enough to afford the life that went with them. Herman had a successful import/export business he had come to the New York City area (they first lived in west New York, New Jersey, then to Amsterdam Avenue at 110th Street) to pursue. However, it had to have been tough going almost immediately since the War broke out in 1914 and presumably anything run by a German (although he and his wife quickly became American citizens) in New York in trade with Germany could not have fared well. If my father was 2 or 3 yrs old in this pic, this would have been 1915 or 1916. After the war Herman took his family back to his home town of Bremen in northern Germany to see his own relatives and presumably to repair his business contacts there so that when he returned, as he did in 1922, to the USA he could rebuild his business. It was a mission fate decreed he wouldn’t accomplish. Only months after he got back he died of a sudden heart attack, falling over while shaving in the bathroom. Hard years ahead for his wife and children.
.
But what put me in mind of the Kettelhack family that preceded mine was my having rearranged the display items on the shaky spindly étagère I’ve inserted among their faces: it seemed to me more German than Victorian - which recalled my father’s intricate imagined charcoal cartoon figures and the ones I draw inspired by him - and how different they are from my mother’s clean cool uncluttered views of sky and bay. Also pressed into service here is a photo ça 1899 of my grandmother-to-be, then Elsie Hilgen at 17 or 18. A glimpse at the turn of the century northern German cultivated girl she was. There’s also a photo quartet of me, 2 in my 30s, 2 in my 60s. (Unnecessarily making the point that there are a lotta me’s.)
.
I’ve decided these amount to articles of faith identifying my father and his family’s influence on me as ‘German’ - which opens up the possibility that I am as much the child of Bremen as I am of New York. I like ideas that enrich my sense of provenance, a word I use to excess because it somehow organizes the chaos of influence into something elegantly speakable.
.
We invent ourselves with every word we utter and mutter.
.
All those forebears are dead. My mentioning them and showing their pictures and celebrating them gives them a kind of life no one else is left to give them. When I’m gone, so (in every likelihood) will they be. Their details - those few I have, in pictures, memories and artifacts - avail me so easily:  they help me make their lives up, imagine who they were, what they were like. Apparently I need them. New York is where I can have them. They all knew this city, found their lives here. In that way we align completely - my mother’s Blake family and the Kettelhack’s and Guy. What other family do I have?
.
Well, the indifferent Cosmos I suppose. Which of course I’m not just the child of but am. You are too. Wanna see it? Look in the mirror.
Posted by Guy Kettelhack at 8:47 PM No comments: