Finding a Rhyme for Linda 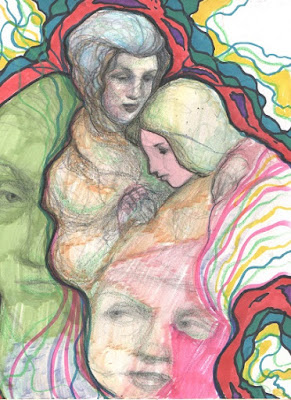 Finding a Rhyme for Linda

My mind, last night, like a cat, came to paw

and to knead – interceding to show its affection

when I woke, overcoming whatever objection

that seemed to run through me in streams

which kept me from seeing the innermost beams

of the sun that would open to one sweet effusion

I’d longed to inspire me – wishing for Linda

that she couldn’t not bring. I felt a soft wind a

a strategic solution to finding a rhyme for her name.

He cheated (stuck wind-a to Linda) but lent me

a dream filled like clouds with soft faces – a frame

of some graces of human reflection – which sent me

to pick up my pencils and markers and faith

to apply to some paper: Linda’s wisdom runs quiet

and sweet through the thing, like a sly smiling wraith

of her humor. Of which you’d heard more than a rumor

from me in the panoply of all the souls she delights.

Whom do these faces depict? You got me, honey.

I asked around which got all my ghosts into fights.

One said he might tell me, if I had the money.

But money I lack. And Linda is far more

than funny, to this Kettelhack.

She is dimensions of Kind, Wise & Smart.

And I give her my heart. And I won’t take it back.

Posted by Guy Kettelhack at 6:20 PM No comments:

Two Songs with a Poem In-Between, in memory of John-Frederick Williams

In Mourning for John-Frederick Williams

Which was your truest New York?

likd her clamorous claims to fame?

What was your newest New York?

Does one have to become certifiably

something requiring rehab to prove

that one cannot imagine inhabiting

anywhere else on the planet but here -

in her gut, breasts and testicles, penis,

vagina and sinuses - all of her vast

and grief, thereby finally in a position

to earn a satiety all of her lovers must learn

she can lend in a breath - sending each

of us harrowingly and hilariously

into what, after all, we discover is death?

She was a bitch, and she’s a bitch still.

But she burst your strife into glorious life:

And you burn more brightly than I ever will.

This is a poem I posted probably too hastily during the last day or two of John-Frederick’s life, knowing he’d be gone soon, but wanting to write it in time possibly to read it to him while he was still breathing, albeit in a coma, in his Mt. Sinai hospital room up on west 114th Street. But I didn’t read it: I don’t think I had the balls to read it to him. His partner was there and I didn’t want to disturb him, which was probably silly because his partner had to have been as tough as John-Frederick was, so he would have borne whatever piddle-paddle I had to say. But I still didn’t read it aloud there. And I always read my poems aloud to John-Frederick; he was such an enthusiastic audience. He thought I was much better a poet than I ever would esteem myself. But the fun of it arose from his perfect understanding of what I was doing. Which was basically being funny, or trying to be. Or at least having fun. He knew all the pulse points – his, mine, and those of everything living. I won’t go on about him now because it’s still too early and I don’t know what to say.

I did however know what to sing, this afternoon. Or any rate convinced myself I knew, this afternoon, why I wanted to sing “The Sweetest Sounds”, which opens this cobbled-together business, and “Softly, as I leave you” which will close it. Karaoke background shamelessly exploited. “Sweetest Sounds” is a charming song written for “No Strings” – music and lyrics by Richard Rodgers: it’s lovely to experience him as both melodist and lyricist. It’s among his best songs. A little thing with a capacious heart. “Softly as I leave you” was written by Tony DaVita (music) with lyrics in Italian by Giorgio Calabrese, translated into English by Hal Shaper. “Sweetest Sounds” is about a life not yet lived, but hoped for; “Softly, as I Leave You” tackles a striking notion, that these are the thoughts of a man dying who wants to spare the love of his life the pain of having to watch him fade from life into death. It’s an extraordinary premise, and it gets into my brain almost virally. It asks us to be this dying human being, and to feel as our last conscious experience in the last breath of our mind the whole giving miracle of loving. I think they’re extraordinary songs, and they came to me this afternoon as the only means I could imagine of saying what still seems to me this moment between life and death is for me – not just because of John-Frederick’s death, not just because of more than a year of feeling half-buried in this Covid Era of Erasure, not just because I will become 70 years old in about three weeks, but because I apparently need sounds and words and behaviors to manage at least for a moment the unorderable, the unfathomable, the unforgiving obstinacy of Existence, with its complete refusal to tell us why. Why what? Why anything.

Posted by Guy Kettelhack at 11:50 PM No comments:

As possibly a blanket defense, or biologically as the first faint dimmings of the onset in me of Alzheimer’s (with or from which my father and his mother died), no memory of anything in my past stands out in any sharp detail. The stories I’ve told and repeated to myself about signal moments in my life are what recur, but nothing with the clout of the initial substance of a moment - vivid smells, colors, faces, places - all of that is sort of what my memory has turned into hearsay. Frankly that’s true of whatever it was that happened to me this morning walking to and back from Rite Aid where I picked up a prescription and stopped in at my Chinese takeout place to pick up lunch. It’s a sort of hazy view, no real sense of immediacy. I’m only ever sure I’m in ‘reality’ in the instant I’m in. The tapping of my index finger on the iPhone keyboard is actual because I can see and hear it (my fingernail, though trimmed, still makes contact with the screen and audibly clicks). But when I stop doing it its reality will become hypothetical almost. I’ve never expressed this instant swallowing of the actual with quite this clarity before. It’s not exactly a surprise - I can’t imagine anyone not knowing through his or her experience what I’m saying - it provides an angle of perception which seems to me almost designed to tamp down memory so that it doesn’t interfere with the immediate impact of actuality. But the forgettingness of things also seems to me so self-protectively defensive. And one of its casualties, for me, is to becloud any memory of anything. It becomes harder to believe in actuality if our experience of it can’t be entirely recollected. How do we know that anything actually happened? Or that anything remembered isn’t just a story we made up to provide evidence that corroborates what we want to believe happened? I know this is Existentialism 101 but it bites me anyway.

Attached are pics of what caught my attention en route to, from & in Rite Aid. It would be churlish of me not to accept them as things actually perceived. So I’ll coast on the sleigh that says they are such a thing.

Posted by Guy Kettelhack at 2:00 PM No comments: