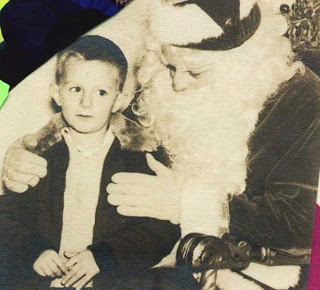 Anger’s quicker at the surface –
don’t know why. As if some flicker
of a wordless purpose can’t stand by
without a flare-up. Partly it’s you’re
feeling dragged into a seasonal
requirement. And what is being dragged
are all the threads and rags and wires
and ropes and tangled tinseled shredded

hopes and shards from the kaleidoscope
of “past”: those glimmered falsities
that might as well be real, and probably
in fact now are: they’re what last. What
have you got but what you conjure up?
Normally the city is the star – not some
card-incarcerated sparkly thing
a king, a king and yet another king

are all supposed to have regarded
with a biblically applauded awe.
Everything is story, and that’s one.
So is Attila the Hun. Whom you’ve begun
today not incompletely to resemble:
slaughtering a slave might be the thing:
making some cowed creature tremble
might reflect this tiny zinging pain

and vulnerable rumbling mumbling strain.
When you were six, and sat on Santa’s
knee, life began to split away from fantasy.
These days you work to mend that rift
against a brutal drift of storm – unclothed,
whipped by wintry sea, out on some
barren icy psychic isthmus. No wonder
anger’s quicker at the surface.