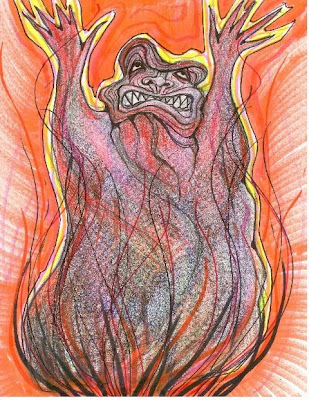 The acts performed by Anger
are theatrically aimed at slapping
you: alerting you to the exquisitely
erosive and explosive and purposive
scintillating hot necessities of direness.

It’s nicest when self-righteousness
can be evoked: snarky little snits
can leave you feeling choked.
But when you think you have a noble
cause to crow about, protect –

look out for the magnificent erection
of a grand morality you’d never known
until its blast that you had waiting
to defame self-evident injustice!

Amazing how articulate
a man can be when he is mad.
But even if you bluster without
consonants, it isn’t bad.