The Thing We Yearn to Learn 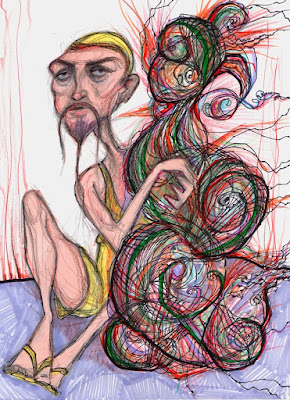 https://youtu.be/mJ_7k5dDX0E
.
There used to be a thing that was but wasn’t.
And now there is a thing that does but doesn’t.
We think they are related. They may indeed be
those belated findings that attest to a confession:
.
to progress defines a wish and not a truth –
like that proverbially vacant gum in search
of tooth – the unregulated manifest beginning
of a swinging spiritual spin which had a sound
.
it didn’t have – as if it were a bell about to ring
that couldn’t ring until it rang. When then it shut
down with the faintest clang. It might have been
another way to be that if someone had only had
.
the perspicacity to see it, they might have told us
how to be it. But that could only be if she or he
were able to foresee the thing’s capacity for seeing,
which is the underbelly of all being. That pretty
.
much becomes the hum that runs the cosmic thumb
that tries to scratch a palm it can’t effectively bend
in to calm the itch of. The thing we yearn to learn
to beat and sing the rhythm and the pitch of.
.
All of which bespeaks what constitutively a shaman
seeks: to master ideation out of lack to pack into
a reverently layered paean demonstrating deference
to thinking without premise, point or reference.
.
Posted by Guy Kettelhack at 12:53 PM