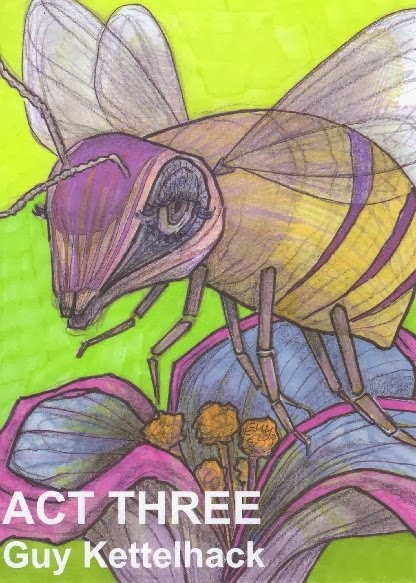 About Guy  (statement for Act Three website - under construction)

I'm the child of two artists - my mother was an accomplished watercolorist, my father had a gift for conjuring up outrageous creatures in charcoal. As their child, I received two extraordinary gifts. One was a luck-of-the-draw DNA aptitude for drawing. But the greater gift was learning, in the demonstration of their lives, that art is essential. It is not a hobby, a minor pastime – something to do only when you’re not doing something more important. It deserves to be the center of a life.

Making it the center of my life took decades: the drawings you see here are the product of a very circuitous journey. As a kid, drawing was what got me the most attention. But writing, which by adulthood took the form of a good number of solo and collaborative nonfiction books – and music, specifically playing the violin – soon took over. For whatever reasons, art pretty much went underground from my 20s to – well, April Fools Day 2009, when, about a month short of my 58th birthday, I sat down to do the first drawing I’d done in years – aimed at accompanying one of the poems I had started writing about 12 years before. It wasn’t a big moment – just a matter-of-fact “I think I’ll do a drawing.” I’ve done one – with an accompanying poem – pretty much every day since.

The drawing almost always comes first. Over the past few years, each of them has insisted on adding creatures to a menagerie of characters which is probably becoming loopier and loopier as I go on. A good friend of mine calls them supernatural. They come out of nowhere. The great adventure for me is to sit, as I do every day at about 4 p.m., in front of a blank sheet of paper without an idea in my head – let the pencil start moving. When I’m done I prop the drawing up next to my computer screen where – against all odds, as it seems to me – a poem begins to form itself – in the same strange half-conscious way.

I call this enterprise “Act Three” because I’m living my own third act, and every creature that keeps tumbling out of me wants to get on stage before the play ends. My logo is a bee because -- well, a bee came out & decided it wanted to be the logo! (It became my calling card for my first art show at New World Stages in New York, thanks to its curator, Bernard Stote.) As I said, I don't know where any of my babies come from. They rule me, I don't rule them.

This website has two aims. The first is simply to give my babies some time on stage: they like performing for an audience -- and hope to delight as many eyes as want to take them in. The second is to provide a platform for their dissemination: they're for sale as 8 1/2 x 11" originals, 5 x 7" prints, and as T-shirts. Eventually a book -- probably a series of books -- will be available, too.

The poems are their handmaidens -- when you purchase an image in whatever form, you'll get a copy of its accompanying verse.

Guy’s art has appeared in the following galleries: Gallery at New World Stages, 2012 and 2013; and in two shows at the Atlantic Gallery, 2013 & 2014. His drawings have been published with accompanying poems in a variety of poetry quarterlies and venues, online & in print, including including Rattle, Autumn Sky Poetry, and Mississippi Crow.

Guy has authored, co-authored or contributed to more than 30 nonfiction books (google on him for most of the full appalling panoply: they include DANCING AROUND THE VOLCANO; THE WIT & WISDOM OF QUENTIN CRISP; FIRST YEAR, SECOND YEAR, THIRD YEAR SOBRIETY; EASING THE ACHE; HOW TO MAKE LOVE WHILE CONSCIOUS). His poetry has appeared in over 25 print and online journals, including Van Gogh’s Ear, Melic Review, New Pleiades, Malleable Jangle, WORM 33, Das Alchymist Poetry Review, the PK list, The Rose & Thorn, Heretics & Half-Lives, Desert Moon Review, Hiss Quarterly, Juked, Anon, Umbrella Journal, Mississippi Crow and The Chimaera.

He’s been a freelance violinist for the past three decades. He lives with great gladness in Manhattan, the city of his heart.

“Act Three” is dedicated to my muse, my confidante, my beloved soulmate Donna Boguslav, without whom my creative life would not, in the forms it’s taken, have been remotely possible.

Posted by Guy Kettelhack at 2:31 AM