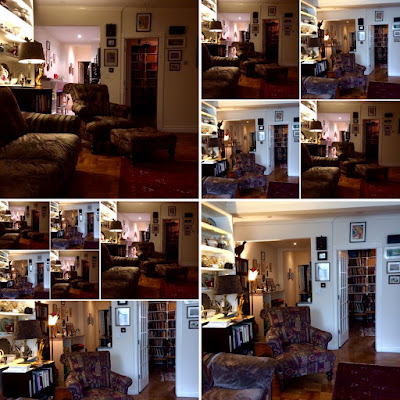 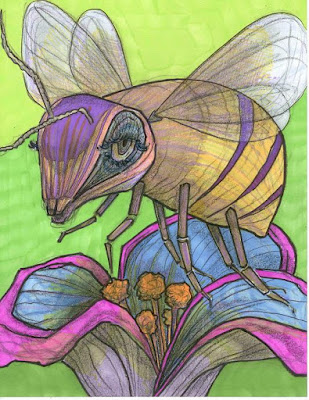 April 4th's "year ago today" Facebook batch of pics revealed a shot of my completed living room - only two weeks in existence (I'd moved in March 21) - and there's a real pleasure in remembering that within far less than two weeks (actually in two days), this whole home took shape - virtually becoming what it's been now for a year and two months. I've had this experience before - watching a home take shape almost magically in a day or two, as if it had created itself - and I know I should logically infer it became that way because I worked my ass off to make it that way. Truth be told, though, I only register the magic. The 'work' to me seems so incidental. The vision was and is paramount. Which all visions if I love them are. Vision is the whole deal really.

But what I'm also enjoying about pausing to reflect on this past year is that I'm not slavering over every bit of evidence of the miracle I find so I can shout it out again: I feel no need to say (as you know from my way too many posts effectively I often do) LOOK, LOOK, ISN'T IT AMAZING?? It would injure it somehow, now, to make a big deal of it. It's the quiet matter-of-factness of transmutation which is to me its biggest interest, attraction, lure. I've believed & said for a long time that everything is a miracle, and wondered why saying that didn't drain the meaning out of the word (if everything is a miracle, wouldn't that mean nothing is?), but it doesn't. Everything is a startling improbability, always always. This is one of those revelations that consist entirely of AND. You don't need to know what it isn't (as you do in virtually every other definition) to understand.

The pic on the upper left dates from April 4, 2016; the pic on the lower right is April 4, 2017, and to me, the instagrammed melange of clustered combinations of both which fill out the other two squares bear witness to the 'deal' that's been made here: it all was supposed to be, and now it is, and ever shall be, until it isn't. Fortune cookie buddhism! But - you know. That's kind of it.

What else haven't I said that I wanted to?

Oh yeah, something more about 'the work' involved in making word flesh - bringing a vision to material form. The work seems to me exactly equivalent to a body breathing. The body couldn't live without breathing, but it almost never gives it a thought. It is experienced, as I'm moved to say it should be, as part of the deal. Each part of the deal is a miracle, the deal itself is a miracle, and so is the outcome. So perhaps there's a systemic gladness, even an ecstasy, that runs through and attends me and the whole thing. But I'm learning it doesn't make a show of itself. Maybe it's too engaged with existence to do that. Maybe it's still doing other business, hatching new visions, I haven't sussed out yet.

My bee's here because he's been sort of the Ur-vision in this trek of my life.

"Busy as a bee" some people say:
but to me he's Work-Made-Play.

Donna Boguslav now owns him because he insisted on it. (From this perch at Donna's he also sends daily thought-missives to Andy Stone.) He wouldn't have it any other way and neither would I.