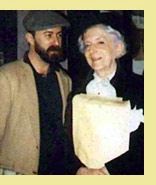 So sometimes when I mention Quentin Crisp to people and they've never heard of Quentin Crisp I sigh a bit and say, well, he was a sort of latter day Oscar Wilde (I sigh because he really was no such thing, but it seems like a cheaply efficient way to 'place' him for a moment) and when they say they've never heard of Oscar Wilde I sigh yet more deeply and launch into an exegesis about the roots of Western Culture, starting with Mesopotamia & its invention of writing and the codification of repression we call "law" and how the combination of codified repression and writing has led throughout the centuries to various blooms of oblique insightful audacity -- for example, Plato's cave, Montaigne's candor, Beethoven's rage -- which in the aggregate have led to the greatest flower of oblique insightful audacity of all, Quentin Crisp.


But by this time, people have left.

By this time, you should be GLAD that they have left!