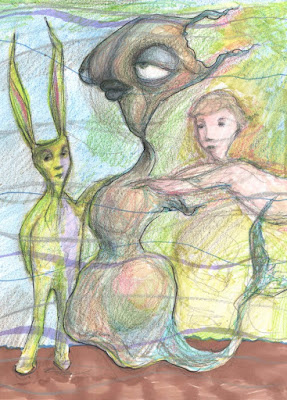 you’re the best. you pass the test:
commit the crime of rhyme
more for its beauty than from duty
to appear as if you’re clear

more verse. that can be the curse.
not every lens will cleanse.
angles of the light can tangle up & fight.
prisms can be prisons.

as the license fee to pay for the licentious way
you must pursue, as if it didn’t bother you,
to go below
to hunt the fish in which abides your wish –

flirt with, lure & kill it; free the blood & spill it –
steal its flesh while it is fresh
so you can eat it – not entreat it & repeat it
like a rabbit with a habit.

it’s unfortunate you’re so importunate.
you write like this too often. you ought to soften
rather than get stiff inhabiting “as if” –
forever trying to be clever.

but isn’t that the aim? how you get acclaim?
isn’t there a ‘should’ in good?
believe, perhaps, in magic. in the pelagic
realm of fishes, wishes, rabbits.

Posted by Guy Kettelhack at 1:34 PM