A Society of Influence - My Avatars 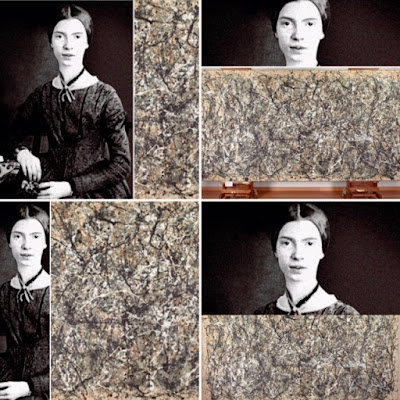 A Society of Influence - My Avatars*
.
https://youtu.be/MnDRz06N-_w
.
Emily and Jackson together form a faction of a fertile unrelenting influence in my peculiar heart. The confluence . you see of her unshaken gaze beside his art of shoots and rays and delicately wavering amazements savoring . their own unlooked-for grace, at last endows her with a place replacing church where finally with her rare air she can doctrinally . know liberty that loves revision. Dickinson is dense in her concision; Pollock practices a loose excess: which in equal manner know success. . They wrestle and caress calamity to make of it an odd-god amity you’d never think a mind could be. They are forever linked, to me, . And linked to me. Although it’s fine if they don’t care or know. Their play will always turn a page; no entr’acte. The warning sign outside the stage: Do Not Distract.
.
.
.

*A friend of mine wrote to me that he was impressed by my having invoked forms like triolet and pantoum in a recent poem (I didn't tell him I'd written the poem 14 years ago and I couldn't tell you what a pantoum was today if my life depended on it). But anyway, in responding to that, I accidentally found myself creating a sort of aesthetic map - embodying principles (apparently) which direct my noodling mind toward whatever it is I do do do. Anyway, what follows is what I said to him. Sort of. (When he reads this he’ll discover quickly that while it more or less begins with what I said to him, it’s been edited and added to - up its considerable wazoo. Writers lie, as surely by now you know.)
.
‘Oh aren’t you kind. I went thru a period years ago when I actually applied myself to learning ‘form’ in poetry by attempting to write in it: pantoums and triolets & oh, what was that annoying other one that Auden would do more than occasionally - oh god, yes, the sestina (I did three or four of those). They were basically little arbitrary puzzles whose successful object was to make me unhappy - and now I can’t remember them at all except for the Petrarchan & Shakespearean sonnet forms which I still can like doing now & again (which means I can follow the rules without their seeming disconnected to life) - that is, when I want to, which I usually don’t. When I decided I wanted to write poems and looked around for poets I liked I could only find two I wanted to have stick around: W H Auden & Emily Dickinson. They’re still pretty much the only poets I think of. (Not that I dislike all the others, I just don't think of them.) I’m not sure why, beyond feeling I sort of know why Auden and Dickinson do what they do and I can relate to it. Like Judy Garland’s vibrato and Henry James’ syntax, diction & tone. Good heavens I’ve just come up with my aesthetic map, haven’t I.’
.
But where’s the rest? There surely must be more. What visual artists do I cotton to? What music? (Beyond Garland’s vibrato.) What about the violin?

The first thing that comes to mind is a single painting - the big Pollock one that takes up a whole wall at MoMA. I don’t know what it’s called but it rivets me.
.
Somewhat simultaneously, Bach and Brahms emerge, and when I think of what I want from them, and that I give myself when I play them on the violin, it's a moment usually in a minor key where they tackle anguish in aching intervals to produce a sharp but passing pain, a pang made tolerable because of its academic dress: it follows gratifying rules even then. The Bach B minor partitas I incessantly play collectively scratch that itch: you get both the thing that moves you almost intolerably (which is the heart of its beauty) and the implicit reassurance that it can be expressed without the world falling apart.
.
But for the moment anyway, at least to myself, I can convey what feels like the beating heart of what prods me in two joined visuals. Emily Dickinson's portrait, Pollock's big painting. Yeah, seen together especially, they ignite me. For the moment, they are my avatars. Maybe I’ll write them a poem.
.
Ha, I just did. (I told you writers lie.) And you’ve already read it.