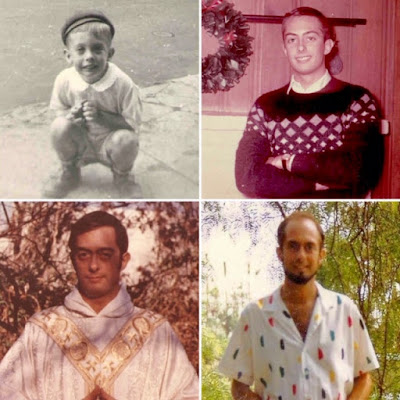 
and far away – as if in some near-empty
ocean various unbidden unrelated
species of sea creatures dimly
make each other’s shadows out
.


beyond the tug and push of a translucent
gray salinity – just visibly enough
to raise a tiny doubt that they might not
be so intractably alone: and yet not
.


terribly excited at the thought: there’s
nothing fraught in this wide stillness –
nothing urgent or intense, untoward:
a lack of any sense of moving backward,
.


forward, up or down: a kind of round
existence in which nothing needed much –
or anything at all. Episcopal priest –
my brother felt, and answered to, a call –
.


and just before he met his fall, he conjured up
a Christ with whom the only possible
experience was ardor – wild untamed desire –
utter longing for immersion. In my brother’s
.


version, God was something so in love with us
that we could not imagine the obsession –
could not know just how inordinately,
inextricably that flow caressed, contained our
.


every little tic and throe. My brother left
the living thirty years ago. Perhaps
my rambling foray now through this uncertain
not unpleasant shroud of cool translucent
.


afternoon is giving, through the flip side
of my brother’s passion, something
prescient. Through its absence,
we know presence.
Posted by Guy Kettelhack at 6:13 PM