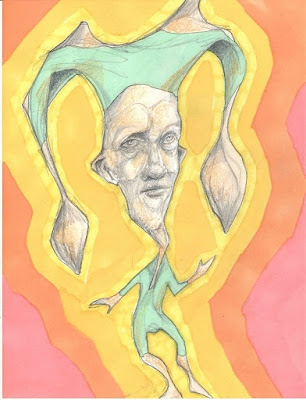 .
I’ve never understood what issues are exactly. I don’t know that I’ve ever really had an “issue”. When I try to think what it could mean I think of the phrase “I take issue with”. That suggests for the moment that an issue is to some degree an organized bit of topic: something you have strong feelings and beliefs about - a kind of somewhat sorted-out mass of emotions and conclusions about ‘bad’ and ‘good’ – but which however strong still leave you with doubt: issues issue from internal conflict as well as have real repercussions in the world out here. That means that they have ‘real’ and wacko bodies and spirits. The stuff you see, the stuff you make up. (Though the two are identical, really.) The verb “issue” is interestingly different - to issue forth or from. It’s an active spume of birth, like a geyser, maybe an orgasm. Except one feels cool saying the word: the word ‘issue’ is abstract, dissociative, arm’s length - gives you a sense that while it’s allegedly susceptible to argument (or “discussion”) there’s an undercurrent of un-ease that won’t go away. It’s the sort of thing that almost can’t not make you angrily defensive. Ambivalence thy (other) name is Issue.
.
I think I know what ‘daddy issues’ imply - that thru some difficulty with ‘the father’ you’re sort of deeply maybe permanently marked by a reflex to see men (and yourself) and relationships with men in a skewed or traumatized way / whose behavioral symptom seems always either to find a Daddy or to be one or in some other way ‘get back at’ or ‘back to’ the mythic archetype you can’t erase.
.
But I’ve found I’ve moved out of those kinds of assessments merely by continuing to live. No therapy is worse or better than time. Of course there’s something to be said for outliving your parents, which I have – it’s now nearly 19 years after my father died in 2000, and 16 years after my mother (2003) - when they’re actually physically gone I suppose it can sometimes presage over time a lessening of whatever “issue” has weighed you down – and into which you’ve unconsciously packed all the iconic ironic ambivalences they’ve prodded in you: they can fade like mist — or if they don’t fade maybe it means you still have need of their disturbances.
.
Strange to think we’d have need of disturbances, but we’ll psychically fight tooth and nail to hold onto our bedrock certainties, however fearful and upsetting they may be. We don’t want to hear the world isn’t flat. But even to say that – or to try to address what an “issue” could mean – unravels me back to thinking I have to defend something. I was quite drawn to the art of psychoanalysis once – I loved the capacious depths of its thought: the best of it really did seem based on something actual. But the problem with psychoanalysis to me now is that it’s words. And these words aren’t made flesh. They go deeper and deeper into the ink they’re printed with on the page. They get static and unreal. I now can’t bear to hear even a remotely psychotherapeutic analysis of anything. It’s artificial from the word go.
.
I don’t believe in ‘problems.’ There aren’t any problems. What there only ever is, is life. Every moment is a moment more of living. Did you break your hip, lose a foot, run out of money, get mugged, robbed, shouted at, vilified by someone you thought loved you – did Job’s horrible excesses of disappointment and pain and loss and cruelty and bitterness fall on your head? Were they all ‘lessons?” If you were ‘good’ would it mean they wouldn’t happen again? I don’t know. All I know is that now my actual parents and brother (who died of AIDS in 1989) have died and retreated into memory and morphed into the sort of past & future only the dead know about, it’s meant a profound relieving peace. I’m not glad to be rid of them. But I’m glad they’ve shown me that death is what happens at the end, and you don’t have to worry about it. And if you don’t have to worry about that, what do you have to worry about?
.
I speak only of me. I wasn’t traumatized the way I know some have been. But I think, can’t not think because this is how I think, that there’s something in the above notion that there aren’t any problems that might help open the heart and the hands and lungs and the mind in people who scuttle about fearfully through life they believe because of trauma. I don’t think central reality is ultimately different for any of us. We’re here and then we’re not. I don’t feel the need for any other certainty. It’s remarkable not to need help. Liberty abounds in that experience.
.
Posted by Guy Kettelhack at 8:17 PM