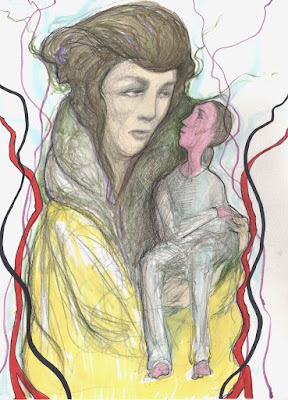 .
https://www.youtube.com/watch?v=jw4nUqk5cdU
.
What do we see when we look at each other?
Or, what are we seeking to find to see?
Don’t you look for yourself when you look
in my eyes? Don’t I look into your eyes for me?
.
Today on a street on the upper west side
I espied a distraught and leashed yipping
chihuahua deriding a large German Shepherd
who with a disinterested languor passed by
.
on his own leash held comfortably by his
middle-aged steward, a small bald mustached
portly man dressed in tweed. The chihuahua’s
companion, a tall lean young woman in t-shirt
.
and jeans who’d allowed her chihuahua to rush
to the Shepherd to get it to stop and take heed,
now looked up from the dogs to the man
who glanced back at her, after which she and he
.
fled in their separate directions as fast as they
could from the scene. What had they seen in each
other that made them vamoose at such speed?
Did they not find themselves in each other’s
.
inspection? Is that why they both had to leave?
Is finding myself in your eyes the sole proof
that I’m here I’ll believe? Is Narcissus the symbol
for this predilection to meet this tyrannical need?
.
Posted by Guy Kettelhack at 7:33 AM