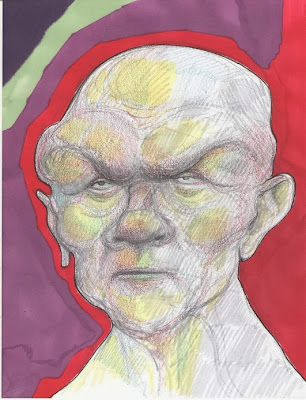 Owing to a blunt genetically inherited decree
that he be thick-encased in orbital bone scaffolding,
his heavy-brow-encumbered close and deep-set glare
makes him look sinister. If 1930s Hollywood were God,
he wouldn’t be a minister: he’d be the anti-Christ.

The rest of who he might have felt himself to be was stolen
in those expectations’ psychic heists. How could he
be otherwise? Poor genetic patsy of received disguise.
We all are equally deceived. Cooked by looks –
our own, and those in other people’s eyes.