A Somehow Apt Thought for the Second Day in January (YouTubed)

https://www.youtube.com/watch?v=41sx1zfNfGU
Another bubbalobby that turned out to be very tasty in the mouth,
which is pretty much my only reason for ever wanting to read
one of these aloud.
.
+*^+*^+*^+*^+*^+*^+*^+*^+*^+*^+*^
.
A Somehow Apt Thought for the Second Day in January
.
If the irreducible component, the sole begetting element from
which existence can proceed is consciousness without intention,
a sort of weather system sentient for no other reason than it can’t
.
not be aware (albeit with no Center to report to), I wonder if the most
persuasive evidence for this is in the human infant’s vacant-seeming
stare. There seems in newborn eyes a numbing, numbed surprise
.
at seeing so much form, where once had only been a dream of it,
an underlying scheme for it, the essential governing condition
called Potential, which is perfect only when it doesn’t come to be.
.
But it came to be the infant you and me and when it did I wonder if it
rid itself of beauties our incarnate eyes would cry to see: indeed,
that what we think is beautiful are after all Platonic shadows of what
.
had to be abandoned for existence to occur. We die as soon as
we are born and, prey to rude discoveries like “cold” and “warm,”
we find we’re at the mercy of the prison which becomes the price
.
to pay for incarnation, and marks the death of the divine, the rocky
continent to which we are remanded till the punishment of limits
ceases storming at us and we’re finally released from Form.
. 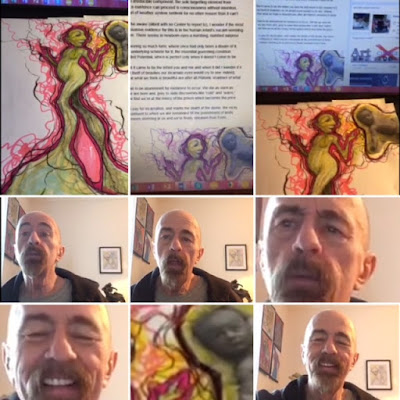 Posted by Guy Kettelhack at 1:23 PM