Clara Schumann’s 3 Romances for Piano & Violin - prologued by a poem, "When Women were the Order of the Day"

First a poem about nothing in particular except that I wrote it - well, something in me wrote it - for Clara Schumann and her half-sister Marie Wieck. Marie was 12 years Clara's junior, and she was a pretty amazing musician, too. Otherwise the poem has no particular aim except to distract you a little, so that you'll forget that music is coming. 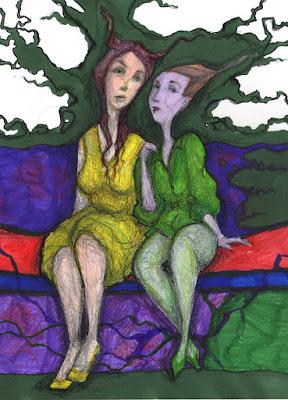 When Women were the Order of the Day
.
A Poem for Clara Schumann and her Half-Sister Marie Wieck
.
They came from watering the horses
And regaling them with hay.
When women were the order of the day.
Sisters were the siblings whom we looked to
For the balance of regard that seemed most
Human in the shadow play
Where love imbued you without effort
To assume you had a place here
.
In the world. Anyway, two girls unfurled
Into two women who sat down
In front of me and talked
About what they could see
So unselfconsciously
It made me want to sit with them
And look at me as well. And so I did!
The three of us conferred about the self
.
We saw across from us
Then lost our train of thought.
They changed the subject to the vagaries
Of hay: which to a feed a horse, legume
Or grass? Their knowledge of the horse
And hay was vast. I felt lonely for the fellow
I’d once been who sat across alone, alone,
an un-played violin.
.
So I went back to him,
And there I’ve spun and here I spin
The business of me out and in
Which hasn’t changed since Eve invented sin
And made the world as wonderful
As it has been. She was the daughter
Of the Morning and the Mother of the Way.
When women were the order of the day. 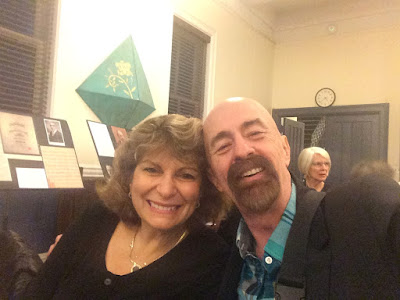 If there’s any enterprise designed to reassure you of the rightness of your conviction born of many years of inarguable (in my case not infrequently humiliating) evidence that if you are a musician, even a creditable one, you will never in your life know the state of performing anything perfectly, it’s, well, just that: playing music. Arlene Hajinlian and I assayed Clara Schumann’s 3 romances for piano and violin and I think we did a fine moving heartful job on it; as far as I’m concerned she was perfect but oh boy is intonation a bitch on the violin for the likes of imperfect me. Still, all in all, in the recording we made of the run-through we did a day before the Broadway Bach Ensemble chamber music concert where we played it – Arlene had recently found out about & had plumbed the mysteries of using the iPhone voice memo to record it (don’t always have to video it! yay) which worked just fine – I think it turns out to have been a pretty wonderful take on these exquisite pieces: we played from the heart and, although it bared all my violinistic sins mercilessly, we managed to do Frau Schumann’s compositions some real justice.
An unmet technological hurdle was how to transfer the voice memo to something you could put on YouTube or Facebook – I got an app called “Splice” which I read on google was recommended for the purpose, but although I searched for step-by-step guidance on how to effect the transfer (to an portable MP4 thingy, someone suggested online) I couldn’t find it. So I ended up returning to video mode and recording it from my laptop, which fuzzied the sound a little but managed, I think, to give it a worthy run nonetheless. I couldn’t think what to put as a visual, so I resorted to showing a sort of wacko passeggiatta of my creatures in the form of the drawings I post virtually daily as profile pics (since I draw one pretty much everyday and have since April 1, 2009, I don’t lack for promenaders). I think it ended up being fun, though there was and may still be a risk for many who watch this to think the point is the creatures. The point is the music: the creatures were just really eager to listen to it, and I hope you’ll agree that they didn’t not like it. I hope you don’t not like it, too. (Either?) In fact I hope you really like it!
What a joy to play with Arlene!
Cheers, from the lot of us.

Posted by Guy Kettelhack at 9:21 PM