This Be Mine! - Today's Manifesto 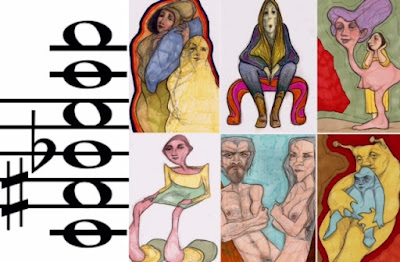 Sort of like gas, every so often I seem to have to discharge a manifesto. It's almost always a version of something I'd passionately averred before. Except for geniuses who do seem to be capable of expressing more than one idea – to play in different keys – most of the rest of us have a single chord to strum. This be mine!

I wrote it in an email to my friend Jesse who wondered if the unwilling mother in my last poem (Sans a Mama) was mine, or based on mine. I offer (possibly as the only entertainment here) 6 drawings – the first is the visual that appears with Sans a Mama - the others those who've simply told me they think they ought also to have been considered for that job. My drawings are always mildly squabbling with me, with each other, with anyone who looks at them. Please forgive them if you can. They’re squashed up against a ‘mystic chord’ associated with Messiaen: a visualization of what I’m tickled to think might not be unlike my single chord. (“This be mine!”)

You often quite forgivably ask me if I'm ever talking about myself in my poems (or my mother or my father et al when I mention such persons). I believe I can say I never am, even if I the poem says I am. The poem only ever talks about itself. It couldn't have another function if it tried! (Which of course it seems always to be doing.) It would be like you being able not to be you or me (ditto). To me a poem (or anything we 'create', which I think more accurately can be put as catalyze into being), as soon as it slips its first mark on a page or a screen becomes instantly autonomous. I always think of Emily Dickinson's 'I' - what a slippery animal that 'I' was. Was Emily in it? Who knows. We're safest saying yes & no & everything else we imagine it could be, all at once. Did it (or does it) have 'her' power? We want to say, how could it not? And perhaps it seems ridiculous to insist on its separateness from her. But it is in a POEM, not an Emily. It therefore has an inviolable inimitable life, that "I", however its meaning as a word in a dictionary may firmly suggest we shouldn't fret over philosophical particulars and just goddamned use it to mean what it says it means: who you identifiably are. If I write "I write" what else could I mean by "I" but the shaved-head-goateed-creature you've seen in way too many selfies?. But "I" still say: it only exists (can't not exist except) in relation to its constitutional function: where it is and what it's there to do. I is not Guy. (Nor am it Guy.) "I" is a  word. So is "Guy."

So who's Guy? Good luck with that one.

Who Emily was, was a profound trickster (I want to say). But really it's the tricksteriness of all attempts to 'say' anything. It's the tricksteriness of appearing to nail down identity. Can a description ever be what it describes? Of course not! As soon as said or written or sung, it has its own inviolable existence as Something Said. It is first and foremost the category of thing it is: sculpture, song, book, pornography, movie, newspaper ad, Facebook Logo, Twitter abbrev. It may recall with great vividness and power various things we want to hear about who or what it describes, things we believe to be true about ourselves - say them so well that it can feel like it really IS saying the thing itself. (Reed shows & tells me how often this happens in Shakespeare.) I suppose that's what 'good writing' is. But even then it really has nothing to do with you. It isn't you, it's writing! We may think we can sometimes put an equals sign between something we 'made' or 'said' and ourselves, but I'm close to thinking we'd always be wrong. Worse, we wouldn't be honoring the mystery not only of the inimitability of a creation but of its putative 'creator'. We're all so much more wonderfully strange than we think. Everything is!

That's my single idea: the single chord I strum. Honor the mystery! I think it's a sort of weird Messiaen chord. Oh, look, I found one in Google - a mystic chord! - associated with M’sieu’ M. But mine would have to be a Guy one. So let's flatten that middle C down there.