Last-Wording It: The Earth IS Flat, After All 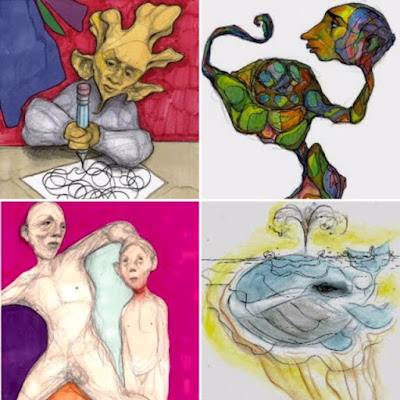 Here I go again, attempting to last-word it. Come up with a “truth”. And not for the first time at the unwitting encouragement of my brilliant composer/writer/musician etc friend Roland Tec, who in his response to my poem/drawing “As Flat as You”
(http://guykettelhack.blogspot.com/2017/07/as-flat-as-you.html) asked me “Had you seen this?” – providing me with the following link to a Denver Post piece about a growing worldwide association of human beings who believe that the Earth is, in fact, after all flat:
http://www.denverpost.com/2017/07/07/colorado-earth-flat-gravity-hoax/ - a somewhat winning quote from which runs:

“This is a new awakening,” Vnuk says with a spark in his earth-blue eyes. “Some will accept it, some won’t. But love it or hate it, you can’t ignore Flat Earth.”

Winnng not least because of the memorably otherworldly surname of its spokesperson Vnuk. If I were his organization, I’d call myself The Vnukkers. You know, the Aliens the Kardashians tried to wipe out on Star Trek 72?

Anyway, I responded to this post and its underlying theme (I do like my underlying themes!) in my usual way, which I evidently enjoyed writing enough to want even you to see it, so here it is.

Good - heavens? (Whatever they may be.)

I find myself ever less able to suggest anything incontrovertible about the human condition, except perhaps the condition of terror probably all of us have of our own unknowing. Self consciousness (consciousness of 'self' not embarrassment about social self-exposure) of the kind with which our brand of higher primates appear to be afflicted puts us in an impossible unanswerable position with regard to anything observable in this gestalt we call the universe, one big fancy word of the many we've coined which describe our endless grapples with the meaning of which is teleology: the philosophical investigation of intrinsic use, that everything is here, or created, for a purpose.

The hope implicit in this attempt to reveal an explicative truth – that truth can be discerned – reflects the desperate hunger in everyone from the Greeks to Sartre to my Aunt Eileen to believe there is an answer, even if the answer is that there isn't one. It's the craving either for a period at the end of our 'sentence' (being 'sentenced' to self-consciousness) or for what the first word in that sentence was or is: that yearned-for 'word made flesh.' We conjure lexical meanings (meanings expressed in words you can look up) like the ones I'm nattering out here as some probably ultimately involuntary endgame of what begins at our cry of aghastness at the WTF is Going On Here Anyway? business which our putative Self Consciousness encounters shortly after it encounters itself. When that self consciousness seems inevitably to prove itself helpless to answer any but provisional questions, it – or we – may decide the answer is 'everything is provisional.' We have to last-word it somehow.

I don't think we can bear not coming up with some last word – or anyway bear not attempting to come up with one. (To what other attempt does 'art' bear witness? I would say pleasure! – but that's no less an attempt at a last word.) 'Wit,' said Quentin Crisp, 'is any comment made on the human condition which is memorable.' To me this suggests the great deep first-cause rapid pulse at the heart of discovering the probability that we exist: the urge to be memorable, something someone else can keep alive and important: to be an answer to something. Wanting this makes it sound like it's all about coming up with the right words but I think it reflects a terror much more harrowingly inescapable than the discomfort of not being able to define verbally what we can see. It's what we don't see, maybe can't see that fucks us up irremediably – or at least we are convinced will fuck us up if we don't keep trying to see it).

Ergo the Earth is flat.

I find a gorgeous hilarity in the likelihood that the only remotely helpful word I may have managed to stumble into offering here is 'convinced'.

And what am I convinced I want/need to do with that word and its accompanying entourage? Turn it into a Facebook Post! To honor its teleological (intrinsic) use as one of our culture's primary recourses to assuage the craving to be memorable.

Blessed/damned if we do or don't. To which I now add my last word(s):

Sent from my iPhone