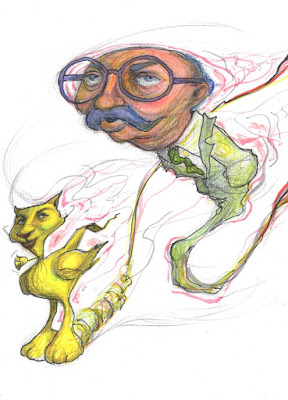 http://www.youtube.com/watch?v=O6u0HdkqL54
.
Red of face and blue of hair,
with his pet BirdCat always there,
both patently identifiably themselves,
diving down at me like flying elves,
.
Psychoanalyst Juan Van der Wiesen
will not otherwise supply a reason
for returning than to say “it’s me!” –
stating something I can plainly see.
.
He then scrutinizes me for evidence
I had not realized (or not disguised)
that I am still alarmingly unwell.
That is generally when I hear the bell
.
on BirdCat’s yellow neck ring twice:
two shakes of it warn “Now, be nice!”
because he knows if I am not,
poor BirdCat will be in a spot:
.
Juan Van Der Wiesen will not leave
until he sees I ardently believe
in his prodigious diagnostic power.
If instead, as has occurred, I glower
.
at him for his rank ineptitude,
BirdCat will start to cry for food
which he will not be fed
until I have vociferously led
.
the analyst to understand I think
he’s diagnosed the missing link
to why I am a rank ungodly mess.
BirdCat can’t eat till I confess.
.
But that’s not what I did today.
Right through their fraudulent display,
I said I saw: “I know you don’t exist!”
I whisked them out of sight like mist –
.
a whoosh! – and that was that.
But I admit I miss BirdCat.
I cried before I went to bed:
I’m why he never did get fed.
.

Posted by Guy Kettelhack at 6:12 PM