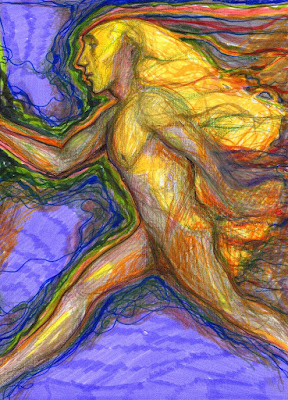 invested in a vision he can see, and sometimes you can see,
and at those moments all his haute Parisian haughtiness
appears to be integrity. That he’s sure he will move
mountains horrifies. The world sends out its spies
to undermine this sort of enterprise.
.
What’s the gold you know is at the center of his soul?
It is true gold, not the gold Johannesburg supplies for bling,
and not the metaphoric thing a humane heart is said to be,
no golden quality of kind attentive empathy, no gold
you’ve ever touched or worn or understood.
.
He’s got that gold. I saw it in him instantly.
When he saw I saw it he returned the blasted thing to me.
“C’est pas a moi. C’est a toi,” il dit.
It’s not his, it’s mine. I’ve never seen Reality.
Truths may not be things that shine.
.