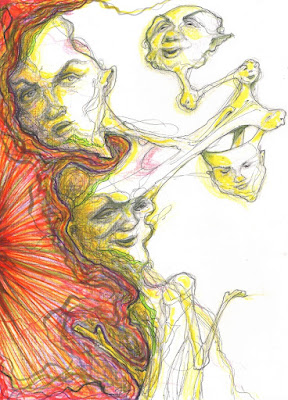 http://www.youtube.com/watch?v=6Fo1SwrgOvY
.
There’s a poem in here and they know it.
Though experience tells them I’ll blow it.
(Six or seven times.) Every last thing is a poem.
Especially this: it rhymes! C’mon baby, show ‘em.
.
Catch the form and pay the fee.
This one’s a composite-of-ghost-faces tree.
Produits de l’esprit et l’imagination en français.
Deux têtes dans le feu*, the rest held at bay.
.
I don’t know how much is resistance
and how much amounts to persistence
in wanting to barge through to tantalize.
Ambiguities easily paralyze.
.
But ambivalences have a chance.
Though often as not they will split your hot pants
at least you’ll have something to show.
The vagina may smile but the penis won’t grow.
.
Poems aren’t sex, you know.
.
.
*products of the mind and the imagination in French.
Two heads in the fire.
.
.